Well, I played around tonight and looked at some of the PakTrakr signals on the oscilloscope and found some noise on the data line going between the PakTrakr "remote" modules. It looks like each PakTrakr remote has three wires coming out of them:

The signal on the green wire had significant over and undershoot on it, so I thought of ways to take the edge off the signal. 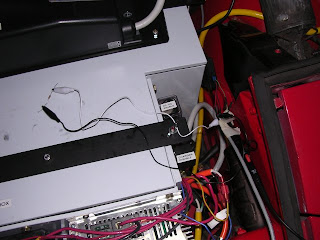 Here's my experimental setup. I added series 100-ohm resistor to the green wire going into the PakTrakr module and all the noise cleared up. The messy serial output from the display module cleaned up too. In the picture above, the wire from the rear PakTrakr remote is the gray wire coming up from the lower right corner. I have some alligator clips and an o-scope probe tied into the mess and insulated with masking tape (what hack job). The alligator clips allow me to insert various series resistors with the green wire. Again, 100 ohms seemed to do the trick nicely.

I gave feedback to Ken Hall at PakTrakr.com so hopefully he can incorporate this into his future designs. The only other thing that bugs me about the PakTrakr is that the modules seem to be made of teflon. No tape I've tried will stick to the back of them. I'll probably end up attaching Velcro with epoxy or something.

One more problem (hopefully) solved...
Posted by TimK at 9:05 PM

Interesting. I'm having similar problems, but only when I'm running the current sensor at the same time. Ken suggested that it was interference from the current sensor wire causing the issue. I'll first try separating the sensor wires & the remote wires and then, if that does not help, try your mod.