I'm still waiting on the battery racks/boxes from ElectroAuto, so I took care of a bunch of little things that have been neglected so far. 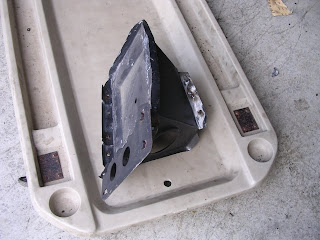 Here's the battery tray that the directions said to remove. It came out surprisingly easily with a hammer and mini-crowbar since there were only a few spot welds holding it in. One of the other 914 kit converters questioned why the accessory battery couldn't stay in the original tray, but I decided to remove it anyway and have the accessory battery up in the front trunk near the DC/DC converter. 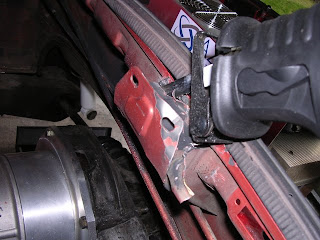 Taking out the hood latch was a bit tougher. First, I tried a large hammer and a mini-crowbar but that just seemed to mangle the metal. Then, I tried the sawzall and that just sawed the thing off like a hot knife through butter. Live and learn... 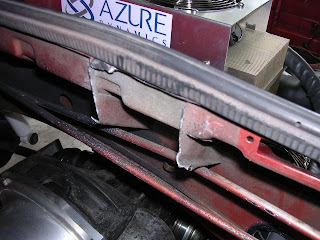 Here's the sawed off hood latch. I saved the latch cable tube and latch mechanism to give to Craig at camp914 as parts for someone else. It's a pity that we have to remove this, but the size of the golf-cart batteries clearly interfere with the latch. 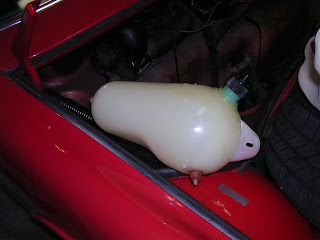 In the process of cleaning out the fuel compartment, I removed the washer solution tank. The 914 uses pressure from the spare tire (??!!) to power the washer solution sprayer. The hoses were leaky and the system didn't work. The technical articles at Pelican Parts describe how to replace the pressure-based solution with an electric pump from a fish tank. I find it boggling how the fluid tube actually goes all the way to the steering wheel controls to a mechanical valve attached to the wiper lever and then back out to the washer nozzles. Having that possibly conducting solution away from the steering column wires will be good. 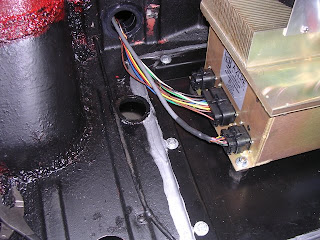 The three-phase AC cable from the motor was too short to actually pass through the 2-inch hole I drilled as suggested in the directions (barely shown at the bottom edge of the above picture). So I drilled a new hole (near middle of picture) and will route the tri-cable through that hole instead. Home Depot sells 2-inch caps that should plug the previous hole nicely. 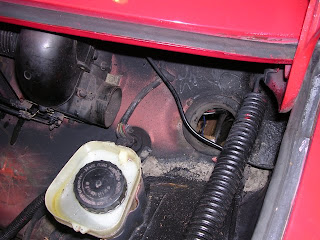 This is picture inside the fuel compartment on the drivers' side. I've removed the heater hose that came up through the passenger compartment going to the duct on the left (just above the brake fluid reservoir). Since heat no longer comes from the heat exchangers over the exhaust system, we're going to thread the high-current battery cables through the heater ducts to connect the front and rear components.

That, of course, leaves us with the problem of heating the passenger cabin. John Benson, who lives a 20-minute walk away converted a 914 with the DC kit from ElectroAuto and he simply attached two hair dryers to the ducts that originally received the heater ducts from the engine. This is another reason why I removed the washer fluid tank earlier: to get at the passenger side heater duct and make room for the second hair dryer. Apparently, many hair dryers can run off of DC or AC voltage of a wide range which works well for a pack voltage of 144V (nominal). 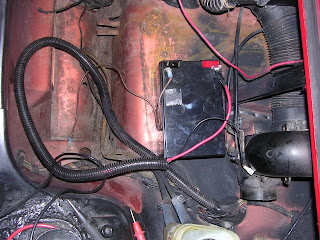 Somewhat to my surprise, the clock started running and when I turned on the ignition key, the CD player fired up and the relay inside the AC motor controller closed. This will give me an opportunity to hook my laptop up to the AC controller through the RS-232 (serial) port and see if I can communicate with it. Just for grins, I also shorted out the two terminals on the lower terminal block tied to the rear lights and (voila!) they turned on just fine. Given the small size of the test battery, I decided not to push my luck and disconnected it after turning off the key.

Now, where are those battery boxes from ElectroAuto.... If I really get impatient, I think I'll line up the 18 8-volt golf cart batteries on the floor and run two battery cables into the controller just to see if I can get the motor to turn. I can attach most of the battery terminals together using bent copper bars and just use cables for the terminals on the end. Since this would just be for light testing, I might even be able to get away with cheaper 2/0 welding cable.

Next up: installing two-wire cable for the backup switch and potbox to keep things looking nice.
Posted by TimK at 7:27 PM