Cranking on the Battery Racks

Well, I've spent the last two days with EV parts strewn about the house attempting to install the battery racks. I ran into some issues that others might find as well. 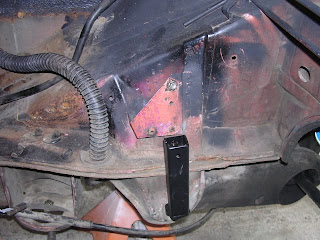 Here's mounting the first rear-rack support post. The triangular bracket above it gets in the way of the rack and must be removed. 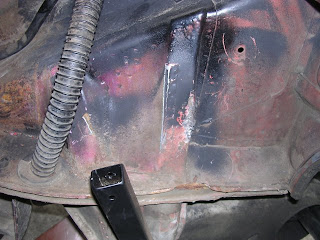 Here is the same area with the bracket removed and edges hammered flat. The tube off to the left is the drain for water that hits the engine compartment hood. I hope I can keep these in the vehicle. 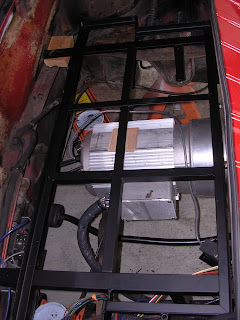 Here is the rear battery rack sitting in place. I have wooden shims on top of the motor to hold part of it up and a 2x4 chunk under one of the mounting plates. This piece just barely fits into the compartment and I had to wrestle it a bit to get it past all the blockages. 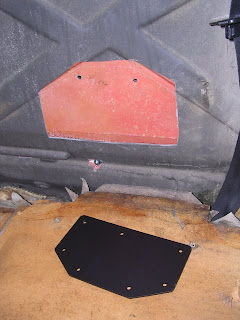 Here is inside the passenger compartment assembling the support plate for the rear battery rack. I cut the compartment rubber to make the connection a bit more and flush against the back of the seat. 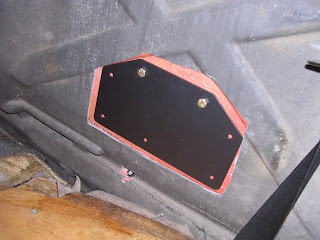 Here's the same area with the support plat installed with two bolts. There are five more to go. I would HIGHLY recommend installing these two bolts and then simply drilling the other five holes one-by-one and dropping in a bolt when you finish each hole. 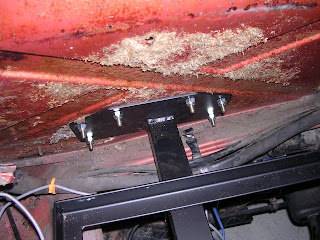 Here are the bolt tips protruding into the engine compartment. I almost drilled into the primary engine wiring harness since it's right in front of some of the holes. I moved it out of the way to finish the mounting. 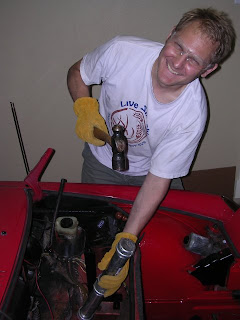 Okay, onward to the middle rack. This was perhaps the hardest of all the battery racks because you have to take a sledge hammer and reshape the well where the brake and clutch pedal sit so that the battery box fits. Part of this reshaping is easy, but the last little bit gets really hard. 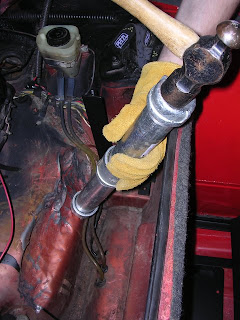 Here I am banging away on the main support reinforcement inside the pedal well. At least on the '75 model, this was very strong and a real pain-in-the-neck to bend. You might notice in the prior picture that the endcaps on the pipe I'm using are bent in from all the force. 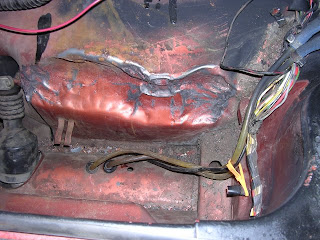 Here's a closer view of the modified pedal well. You can see the bulge near the middle where the support reinforcement is giving me a bunch of trouble. Also, notice the orange tie-wrap near the lower-right corner of the picture to hold the fragile brake fluid lines out of the way so I don't damage them with all the sledgehammering.

There's a brown/yellow wire going down into the sheet metal next to the brake lines. I had to cut the electrical tape on this loom to separate this wire (parking brake switch) so that the loom could move out of the way and not get pinched by the battery rack/box. 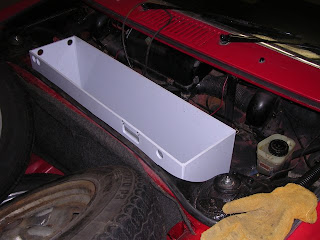 Finally, the battery box sits mostly in place after over two hours of hammering away. I ended up with major bruises on my left arm and big blisters on my right hand. 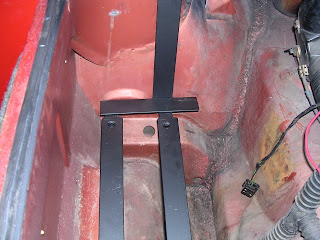 Argh! When I install the supports for the middle bracket, the '75 model appears to be too wide when I add the horizontal angle stock. Note the space between the end of the horizontal bars and the support mount on the far wall. 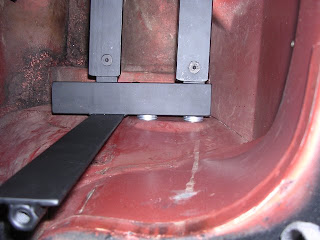 I solved this problem by adding three 8mm fender washers to bring the end mounts closer together. It didn't make it all the way, but it's enough to get the battery box in and not have things slide around too much. I didn't want to add too many washers since it might reduce the shear strength on the bolts.

Another quick note, to get the captive bolt plate through the fender wall, I had to crank the steering wheel all the way in one direction to get my arm in there. 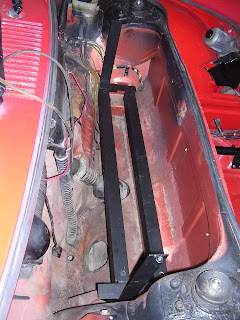 Here's the finished middle battery rack. It may have a few gaps, but I can add some shims later, if necessary. I'm just happy all that hammering is done. 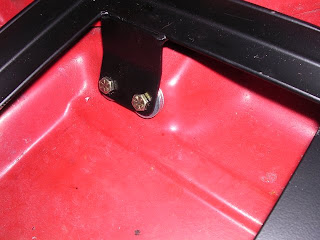 Installing the front rack was very interesting. Apparently, someone had dented the bottom of the trunk and the rack didn't sit straight at all. Also, the '75 model had some structural modifications to it (perhaps to improve body strength) that prevented the front battery rack from sitting flat in the trunk. I had to add these washers above to get the rack parts to sit in the car. 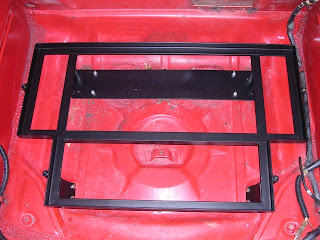 Here's the installed front rack. This is the first time I've run into parts from Electro Automotive that don't line up with themselves. The captive bolt brackets that come up from the bottom of the car had a bolt spacing different (by about 1/8") than the holes in the rack itself (???). I chose to drill the holes in the rack a bit bigger so that the captive bolt bracket would fit into the holes. 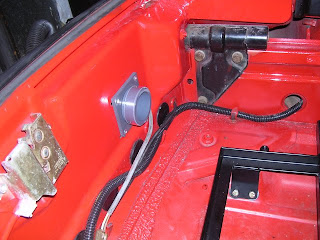 Here's the installed exhaust outlet for the front luggage compartment. Again, I was surprised to find that the template and instructions supplied by Electro Auto didn't match the holes on the outlet, so I had to measure the distance myself and re-drill the holes. 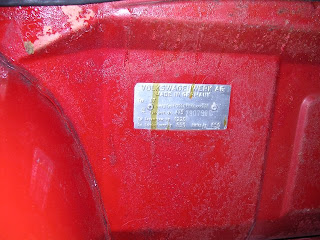 When I removed the custom-felt in the front luggage compartment to prepare for the batteries, I found this factory plate which had some cool stats on it.

With the racks installed, I can now start on some more of the wiring. I'm excited to work with the high-current cable. Have a great weekend!
Posted by TimK at 10:33 PM

The tube off to the left is the drain for water that hits the engine compartment hood.

I don't think that the deck lid rain tray fits with the battery box in place (I dry mounted it to test) so the drain tubes are of minimal use, at best. I don't plan on putting them back in.