I let out a major sigh of relief today when the new Iota DC-DC converter showed up today along with the synthetic transmission fluid that ElectroAuto said they would send me. I'll start the installation tomorrow after finishing my third week of commuting to work. I've been biting my nails over the past few weeks, living in fear that my 12V battery would suddenly run out on the freeway in the rain as I drove with my headlights on. 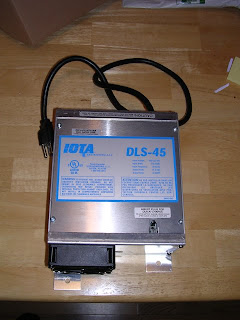 Here's the Iota DLS-45 12V power supply. EVParts.com sells it as a DC-DC converter for many of their electric vehicle conversion kits. It cost me $130+shipping and is spec'ed to put out 45 amps, which should be very adequate for running all the 12V accessories in the car. It's a bit larger than the CCPower C400 DC-DC converter supplied with the kit, but it still fits in the same space and can be plugged into a 115V AC outlet for charging the accessory battery offline. EV conversion kits have you make a three-prong plug with the hot and neutral tied to the main battery pack to supply this converter.

I just got an e-mail from Randy today describing how he saved a bunch of current by replacing all his bulbs with LED ones. The LED bulbs require a modification to the flasher circuit due the greatly reduced load. I'll post that when I get the details from Randy. 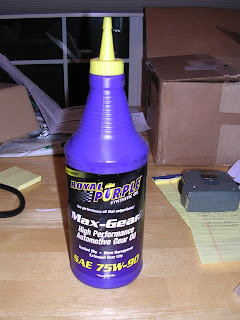 I also received three quarts of Royal Purple synthetic gear oil from ElectroAuto. The stuff I have in the transmission seems to work fine, but I suspect this will provide less resistance to the electric motor. With the lack of torque, I'll try several things to improve the performance.

A few days ago, I also received an e-mail from Beth Silverman at Azure Dynamics. She mentioned that there is a slightly longer version of the AC24 (called the AC24LS) that puts out 15% more torque and is only an inch longer. If you get the 914 AC kit, you might seriously consider getting this upgrade, although I don't know the additional price. My gut tells me that if the AC motor ever dies, I might just replace it with a 9" DC motor to get a bit more power since distance isn't as critical to me, although the regenerative braking is nice. Just the cost of the DMOC445 controller is the same as a 9" DC motor, motor adapter and Curtis controller.
Posted by TimK at 9:26 PM

Tim, interesting info on the "AC24L". I hope your new DC-DC works out! Regarding various AC motors, I've put a post up on my ElectroJeep site with some of the info that led me to choose the AC55 for the ElectroJeep

I also added the Advanced DC 9" motor to those charts, FYI. It's better at low RPM, but the AC24 is better at high RPM. Tough choice.

Thanks for posting those graphs! Given that the Advanced DC 9" has twice the torque at zero RPM, getting around in the city would be much more fun. By selecting the proper gear, you could also keep the motor around 3000 RPM and get more acceleration at higher speeds as well.

It's a bit funny that since I got the new transmission that runs smoothly above 5400 RPM, I rarely ever take it up there because the torque dies off so quickly. I should have analyzed the torque curves much more closely when I first purchased this kit.

Have fun with the ElectroJeep!