Those (Not So) Good Vibrations

Well, it's time to bite the bullet again and see what I can do about the car vibrations. My friend graciously helped me remove the motor/tranny from the car again this morning and assisted with crude vibration measurements. 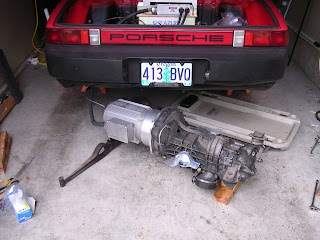 We removed the motor/transmission from the car and re-attached it to the AC controller wires while on the ground. After spinning up the assembly to approximately 5000 RPM, the whole assembly started vibrating across the floor like those toy footbal players on the vibrating table.
I guess this is good because we can replicate the problem with the unit outside the car. 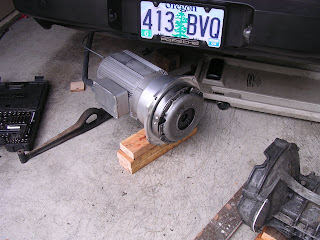 This actually concerns me quite a bit. The outer edge of the flywheel looks very smooth with little runout, but perhaps the person who machined off the teeth didn't get the outer edge centered well.

We then took off the clutch assembly and did some slightly more accurate measurements. After spinning the flywheel up to 9500 RPM, we let the flywheel slowly decelerate to zero and took note of the RPM ratings that we felt vibrations at. With just the flywheel, we got vibrational peaks at approximately 1500, 2900, 4400, 6100, and 7400 RPM. As you can see these are all somewhat integer multiples of 1500 with higher harmonics. The largest spread of bad vibrations existed in the 4000-5200 RPM range which correlated with the RPM of the car shaking.

After taking off the flywheel itself, we just spun the motor with the adapter hub on it (see picture below). While the vibrations were much, much less, we still felt measurable buzzing around 1700, 2600, 4900 and 6300 RPM. This is vaguely unsettling that the Azure Dynamics motor would exhibit vibration without any major weight attached. I suppose it's possible that the weight of the flywheel could have hurt the motor shaft bearings at these RPMs, though.
Also, keep in mind that the ISR2Hertz RPM gauge on the laptop from the DMOC controller probably had a 0.5 to 1.0 second delay from actual value to read value, so these RPMs may be off. 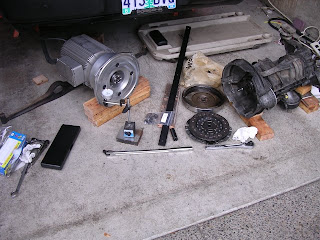 Here's the final mess after removing the components from the car. I'm not sure where to go from here since the vibrations got progressively lighter as I removed components. I was able to spin the flywheel and AC motor up to 10,500 RPM without getting major vibrations, but these smaller vibrations might be amplified when the clutch assembly and transmission are attached.

My plan is to take the flywheel/clutch to Dan Hall's Automotive Machine shop and have him rebalance it. (He's the only shop in town with a small enough shaft to fit the VW/Porsche flywheels). After that, I hope to put the flywheel back on in several positions on the adapter hub to see if I can cancel out as much of the runout and wobble as possible.

The current runout measurements on the adapter hub are still 4 mils and the wobble is about 1 mil. Perry Harrington, the machinist who created the Electro Auto adapter hub called me last week and suggested getting a brass hammer and tapping the flywheel on moderately tight flywheel bolts to eliminate the runout. I'll keep y'all posted as I get the flywheel back from the balancing shop...
Posted by TimK at 6:46 PM

My Dad had to have the propeller balanced on his small airplane one time. While the propeller spins only in the 2K rpm range it might be possible to see if the equipment used could handle the higher rpm of your motor. I wasn't there when the guy balanced the prop but I know he used some sort of strobe device, did some calculations, then added weight, and the vibration problem was gone. If you can't get the vibration issue solved you might contact some place like FlightCraft at PDX and see if they can recommend a prop balancer.

I think that you may be able to program skip frequencies into the motor controller, such as skip 23Hz-25Hz, skip 42-43Hz, etc. Most industrial VFD's (of which your controller is a close relative) allow this. This allows you to tune out limited harmonic vibrations easily.

Also, the teeth on the flywheel probably were not machined off, but rather heated up and simply popped off. The ring gear is just pressed on, so removing it probably did not affect the alignment of the flywheel.

Hi David, thanks for the idea on the prop balancer. I took it to a professional shop and they spun it up to 10K RPM. I'm more of an electrical guy than a mechanical guy, so that was easier.

Carlo, the skip frequency is a great idea. The Azure Dynamics controller doesn't support this, but I'll pass on the suggestion. Cheers, Tim

Great looking project, I'm not sure I'd be brave enough to tackle a 914 conversion on my own. In case you're looking for hints theres a shop I dealt with here in Phoenix that had many of the conversion parts I needed for my project a few years back. Check out their 914 EV gallery for ideas...