Finishing the Rain Gutter for the Engine Compartment

The major project of the day was finishing the rain gutter under the engine compartment lid. The original gutter was too deep and interfered with the rear battery box. As described in a previous post, I purchased a piece of ABS plastic from TAP plastics and bent the edges to make a rain catch. 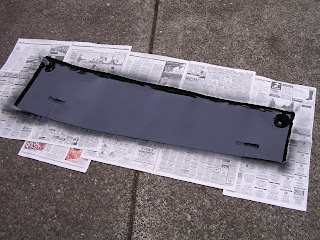 Here's the plastic that I bent a few weeks ago. ABS plastic has the nasty property of deteriorating quickly in sunlight, so I spray painted it with three coats of Krylon black satin paint to protect the plastic. I also drilled holes where the lid mounting bolts were and cut out the bottoms of the drain wells on either ends. 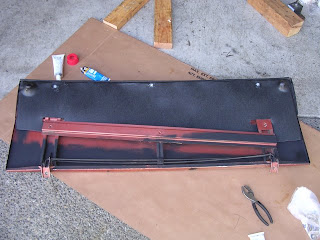 Here's the plastic installed on the underside of the engine compartment lid. There are three bolts on the top edge that hold it on. The bottom edge is held on by sliding it under the horizontal support beam. I used silicone caulk to seal the three bolts to prevent leaks. 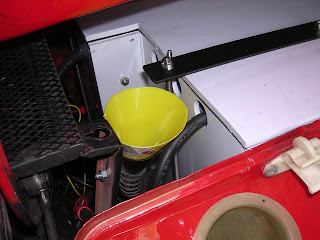 Since the new rain gutter sits much higher than the old one, I added some cheap 99 cent funnels from the hardware store and cut them so that the top was level with the ground. The larger funnel input area also allows the downspouts on the gutter plastic to be slightly off center in case I goofed up a bit. 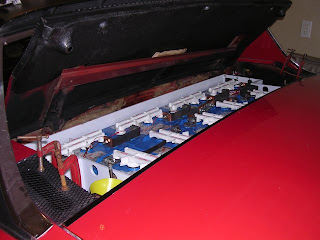 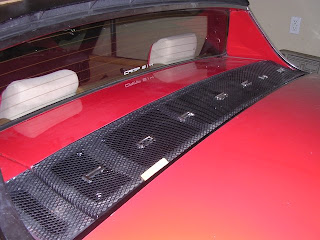 After the cement on the small side pieces was dry, I was able to close the hood as shown above. ElectroAuto still hasn't delivered the hood pins and I suspect that I'll never see them at this point, so I'm still using a small square of plywood to hold the lid shut.
Posted by TimK at 6:03 PM