Last week Craig at Camp914 offered to lend me another transmission to see if I had vibrational issues. 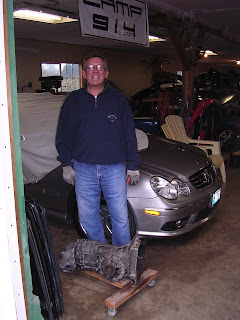 I drove out to Camp914 this morning. I wish to express much gratitude to Craig for letting me borrow this spare tranny. Since it's an older tail-shifter and many of the external pieces are missing, he even gave it to me. 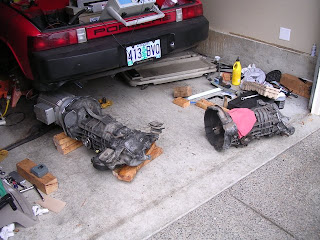 Here's my test setup again. The working transmission is tied to the motor at left and resonates at 5400 RPM. 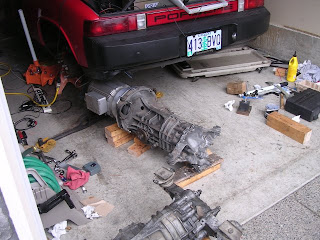 Here's the alternate transmission. Again, I don't have the clutch friction disk installed, so the only thing that the flywheel is touching is the input shaft inside the pilot bearing.

The moment of truth: After spinning up the system past 7000 RPM, I got no vibration whatsoever. Rats, there must be something up with my own transmission. I suspect that there's something up with looseness in the transmission shafts or perhaps rattling in the pilot bearing. I got a new pilot bearing yesterday so I'll see if that helps. It looks like this is an isolated case and not everyone will have this resonance. I wish all the other 914 AC kit owners luck. 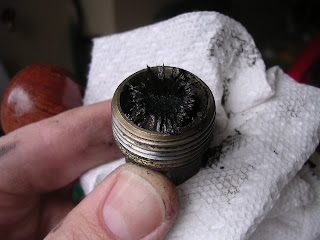 Next up: Getting the tachometer and warning lights on the dash tied into the DMOC445 controller.

Note: Ross Cunniff is burning the midnight oil over at http://volt914.blogspot.com/
to try and get his 914 AC done this weekend. I wish Ross the best in getting the second 914 AC kit on the road!
Posted by TimK at 6:14 PM