Getting Old Batteries and Fixing the VDO Clock 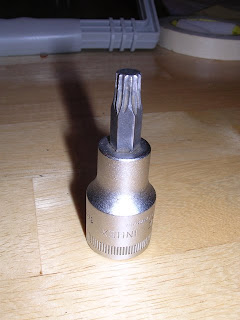 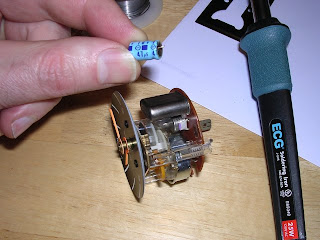 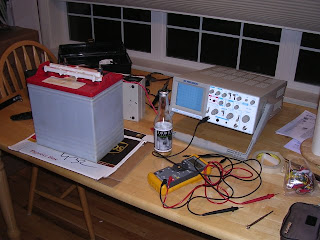 Whew, today was a long day. My friend Jonathan was in town and helped me go out to pick up some old, sulfated 8-volt batteries from Pacific NW Yamaha Golf Cars. Bob at NW Yamaha was great and sold me some old 8-volt batteries for $5 apiece. I'm going to use these to test out my 8-volt desulfator system to see if I can revive them. These US-Battery models are the same that are going into the electric car conversion. The one on the bench in the picture above was rather low and I had to add half a gallon of distilled water to fill it up.

Jonathan and I also headed back out to Camp914 to say HI to Craig and get some 914 counseling on how to jack up the car and remove the engine. He graciously let me borrow his special "12-point CV joint removal tool" (pictured above) so I could disconnect the engine from the rear axles more easily.

Jonathan and I also spent about an hour fixing the VDO clock which tends to die on most 914s. It looked like the entire clock gear mechanism was intact but the motor wasn't turning. After playing with my new $400 oscope, I reverse engineered the crystal-driven circuit on the board and found an open capacitor. The existing capacitor was rated to 16 volts and probably exceeded its expected operating life of ten years or so running continuously in the car. I replaced it with a much more robust tantalum capacitor rated at 35 volts and the clocks runs fine now. Craig at Camp914 was gracious enough to give me an accessory bulb socket so I could light up the clock too.

This will probably be my last weekend of joyriding in the car in its gasoline form since Alan at A & P will be swapping out the suspension next Thursday. Things are starting to move forward.
Posted by TimK at 8:22 PM