Transmission Woes (More than I bargained for)

Today was an educational and humbling day. I appreciated having the new garage space after the engine went away. I started opening up the transmission because first and second gears were grinding badly and I wanted to see if I could replace the synchro rings. 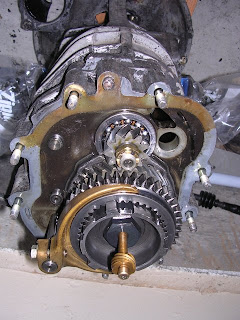 Here's the back end of the transmission with the cap removed. The crescent-shaped shifting fork for first and reverse is on the left. The expansion bolt with the golden speedometer gear is in the center. 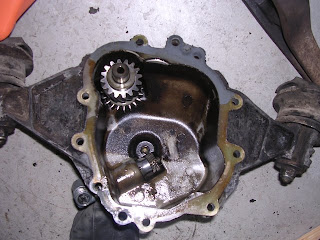 Here's the back end of the transmission. When I pulled off the back end, the reverse gear in the upper left fell out with all its various pieces all over the floor. I'll try to not do that again. 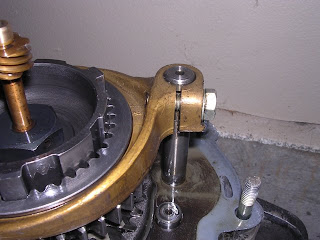 Here's a closeup of the first/reverse gear shifting fork. I took this so I could align the fork when I put the transmission back together. 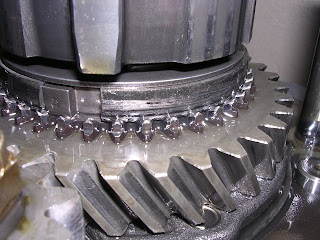 Here's the synchro ring (just above the small teeth) for first gear. As I suspected, it's clearly worn down and probably not doing much any more. 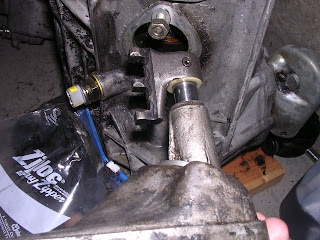 To continue taking apart the transmission, I needed to remove the shift-lever fingers which activate the internal shift rods. 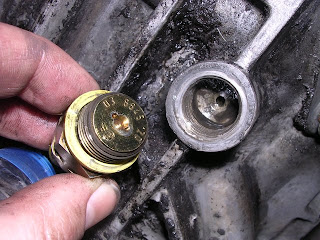 I also had to remove the reverse gear electrical switch pin (which goes in the small hole). 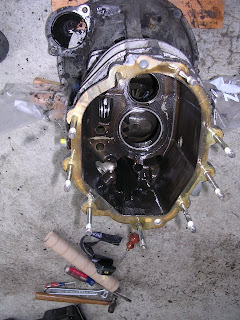 Here's the back of the transmission with the intermediate plate removed and all the gears pulled out. The large top hole at the back comes from the driveshaft and the larger hole in the center goes to the differential. 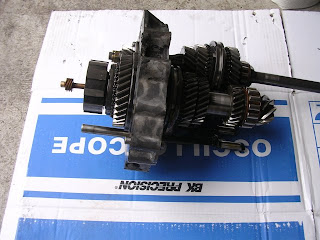 Here's the intermediate plate with all the internal gears still attached. 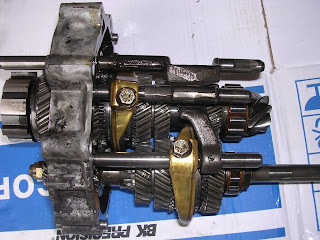 The same assembly turned over to reveal the golden shifting forks for 2nd/3rd gear and 4th/5th gear. 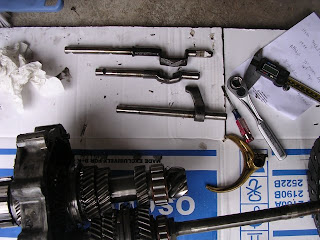 To get the gear shafts out, I had to remove the forks and the three shifting rods, shown at the top. 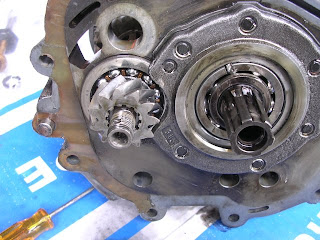 Oh, the horror! If you click on the picture above and zoom in on the right bearing, you'll notice that its cracked apart in several places. These bearings go for at least $185 at Pelican Parts, more elsewhere. 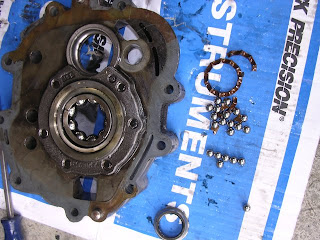 Oh, more horror! The pile of bearing parts and balls fell out of the driveshaft gearset when I removed it. This bearing costs over $200. I hope I didn't cause these failures when tapping the transmission shafts to get them out. I would think it would take much more force than that. 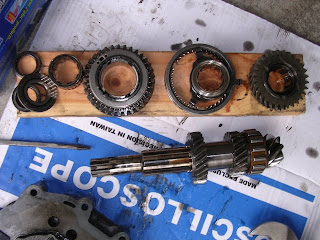 I was able to shake the gears and pieces loose from the pinion shaft and line them up on a 2x4 for inspection. 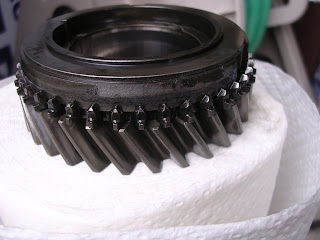 The synchro ring for third gear has significant wear, but is still marginally useable. 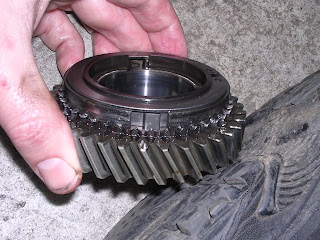 As I suspected, the synchro ring for second gear is completely worn down and useless, causing nasty gear grinding. These synchro rings are reasonably easy to replace but cost about $65 each. 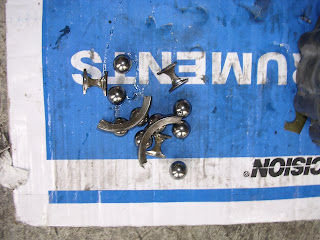 Here are the balls and broken pieces from the broken pinion bearing inside the intermediate plate. Again, I hope I didn't cause this breakage. The inner race piece that rubs against this bearing on both sides is a bit tight on the shaft and I'll probably use heat to put them back on the shaft to prevent future breakage.

Again, this was a fun day with several runs to the store for obscure tools (like a ring spreader and a gear puller), but overall it was educational. I'm probably back about $600 in transmission parts just to put the transmission back together, but they needed replacing anyway. I'll have Alan over at A & P heat up the intermediate plate and replace the two broken bearings.

Next up: cutting the hole for the motor controller box...

UPDATE: I did a much closer examination of the broken bearings and the broken edges all had significant wear since they were broken, indicating that they've been bad for quite a while. Leave it to German engineering to keep things running past their time.

After ordering all the broken bearings, seals, synchro rings and such, the total bill at Pelican Parts (with a $20 discount they sent me) was..... $620.00 (Ugh!). I guess I'm a stickler for a good stickshift. On a more positive note, I was washing the intermediate plate in hot water and it heated up enough that the broken bearing sleeves just popped right out. I might not need to spend the $$$ at A & P to have the new ones installed if they are just like the old ones.
Posted by TimK at 4:12 PM