Today was a day for really getting my brain wrapped around the initial wiring. After studying the AC kit diagrams and reading the motor controller documentation from Azure Dynamics, I think I understand a little better what all these relays and terminal strips are for. 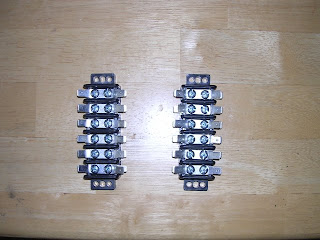 Yay! The two six-position terminal strips that ElectroAuto promised were in the mail today. This means I can really jump into the wiring. 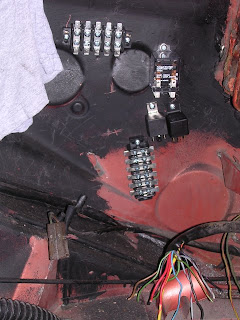 Yikes, this isn't pretty, but I think it will get the job done. One of the major difficulties in placing all the terminal strips and relays is that the left mounting wall inside the engine compartment is not flat in many places. To allow enough room for wire connections and put the pieces in roughly the right place, I had to angle some of them. I tried to leave a space for the current shunt (between the two circle depressions), but I have no idea how big it actually is. Randy, another 914 EV AC kit customer is going to send me a few sketches so I can move things around, if necessary. The instructions call for two of the small black relays, but I only received one, so I ran out to Napa Auto parts today to get the second one.

I keep telling myself that I have plenty of wire, rivnuts and crimp connectors in case I need to redo anything. 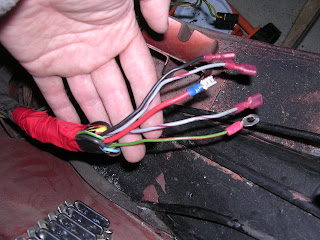 Here's the main wiring loom with the important wires sticking out and crimped. The remaining wires are folded back on the loom and taped in place with red electrical tape. The green/red wire drives the oil pressure light and will be tied to chassis ground on a bolt, so we use a closed terminal. The black wire is the 12V switched supply from the ignition switch. The two grey/dark-red wires drive the backup lights.

The red wire comes directly from the 12V post on the battery. It was formerly the alternator charging cable. The instructions call to add a separate 16-gauge wire to the positive battery terminal, but since this one was already in the loom, I used it instead, albeit with a thicker crimp terminal.

The directions also say to pull the black/yellow-stripe wire out of the main loom. This is a trick request as there isn't a black/yellow-stripe wire in the loom. This wire exists in the loom that travels back to the brake lights. Thus I had to add a wire and splice it into the black/yellow wire near the trunk. This signal is new to the AC version of the kit because it flashes the brake lights when the regenerative circuit is active. 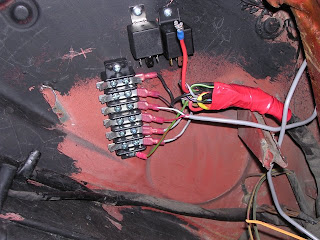 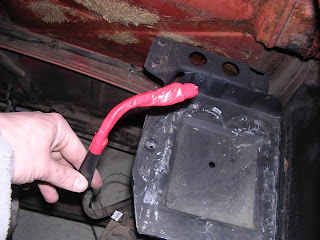 The directions call to remove the positive terminal clamp, bolt the 12V wires together and insulate the whole thing with electrical tape. Just to keep things clean, I also removed the negative battery clamp and cable since it didn't go anywhere but into the chassis. 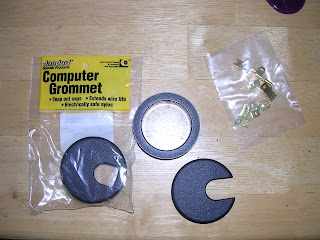 I finally found a solution to protect the 2" hole drilled between the engine compartment and the rear trunk where the motor controller sits. I found these somewhat deep nylon computer grommets.

Off to the upper-right is a small pouch of piggyback terminals from Radio Shack that I needed to properly follow the wiring instructions on the relays. 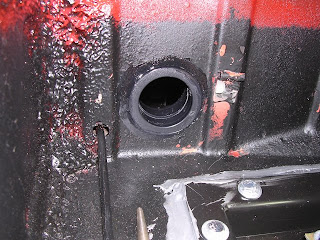 Here are two back-to-back computer grommets glued with liquid nails into the 2" hole in the trunk to the engine compartment. After this dries, I'll be threading through the DMOC motor controller wiring harness and attaching all the wires to the relays and terminal blocks. 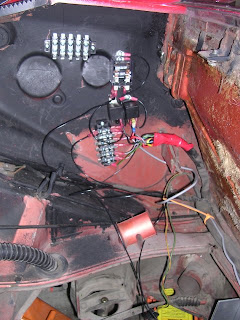 Here's the current mess of wires. Most of the really loose ones are the black wires from the relays to the potbox. I suspect this will look a bit nicer after I tie wrap everything into place. 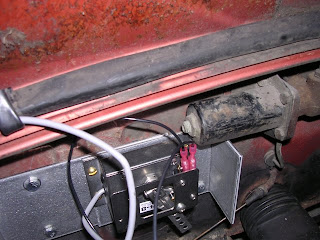 Here are the two neutral start connections to the potbox. These connections prevent the driver from starting the controller unless the accelerator pedal is fully released. I had to use an ohm-meter to determine which two of the three terminals to attach the wires to since the directions just say driver side connection and passenger-side connection.

I think that's it for today. I'll try attaching the motor controller harness tomorrow after the grommet glue dries. After all that wiring is done, the only other connections that are technically required are the regen-disable and power-mode connections. These will probably go up to a switch and knob in the driver cabin. If I had batteries installed, I could just ignore those two connections and the car would still operate. Getting closer...
Posted by TimK at 12:58 PM

Hi, My name is Matt and I've enjoyed your blog as I also am build an electric Porsche 914. Being from Illinois we only have rusty ones and I've been doing the body work first. I noticed you still have the battery tray in, doesn't this get removed? I have the instructions from the DC kit (the only one Electo made when I started)and it has this taken out. I would like to do a AC kit for the regenative braking and hope Electro Automotive gets it together in the next few months as I'm getting close. Matt