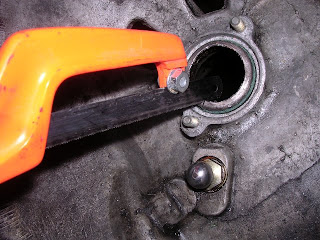 Here's the hacksaw after cutting the slot. The seal pulled out with a pair of pliers after this. 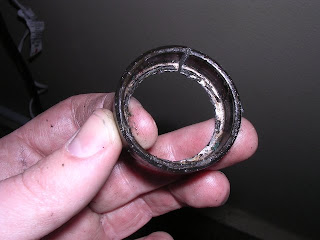 The cause of much frustration over the past few days. 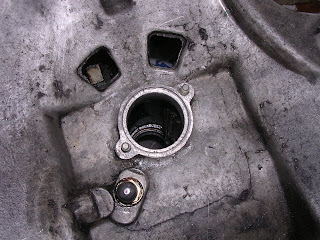 The mostly clean hole left with the seal removed. 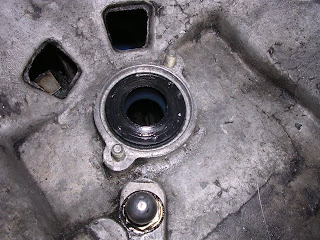 Here is the new seal in place. Even after lubricating the seal and the surrounding hole with oil, I still had to use the throwout tube and a large hammer just to get it in. It took almost as much force to put in as it was to take out. I didn't even get it flush. 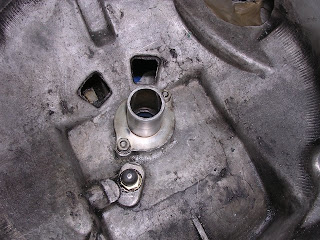 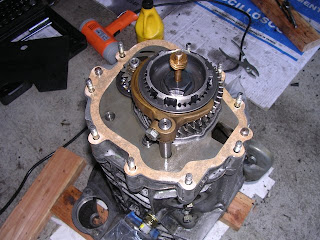 With the front seal back in place, I added the rear gaskets, wetted them with transmission oil and installed the intermediate plate with gear shafts. This actually went fairly smoothly. 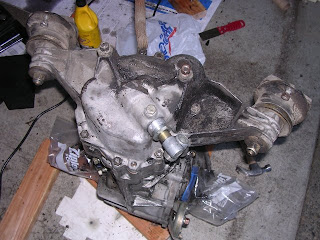 Here's the rear transmission cap installed. It was a bit of a trick to get the reverse gear to slide into place since it sat inside the rear cap. 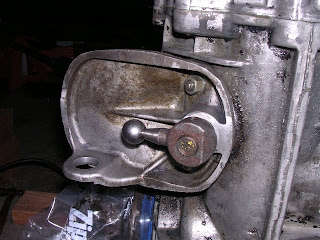 Here's the shift support installed with a new O-ring and gasket. I also have a new shift rod bushing and cap over the protruding ball. 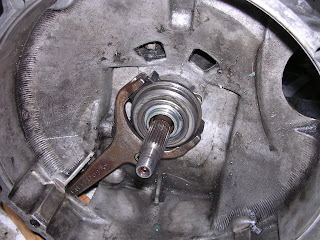 And finally: The throwout bearing installed.

At this point the transmission is fully assembled and just needs a load of oil. Yay!

Next up, filling the transmission with oil and starting on the potbox installation. Installing the electric motor and the potbox requires some rare hardware (rivnuts and hex-head nuts) that I hope ElectroAuto will send to me.
Posted by TimK at 9:05 PM

Are you sure you need first gear? It is kind of weak, so I just locked it out on my '74. You can see my progress on http://www.roadglue.com

First gear is arguably "optional" but my car is very sluggish if you start it in second.

For future reference, I believe *the way* to get the transmission main seal out is to use a slide hammer.

I would agree with Ross that the car is very sluggish without first gear. I think the 9" DC motor has much more torque at lower RPM and doesn't need first gear.

My transmission main seal must have been glued in because the slide hammer didn't do anything. I even had to wail on it with a large hammer to get the new seal back in. (???!!)

I'm glad it was much easier for you , Ross. Cheers, Tim