With the motor/transmission bolted into the chassis and all the mechanical shafts/cables attached, I'm starting the wiring. ElectroAuto sent me the incorrect terminal blocks and missed one of the smaller relays (assuming the instructions are correct), so I'll probably run out to Napa tomorrow and see if I can pick up more stuff. 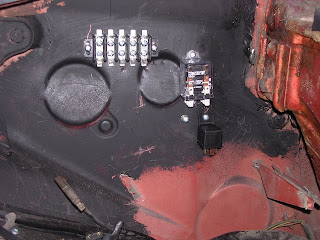 Here is the first terminal block and two relays attached to the left wall behind the driver. Notice the second bolt on the left at the bottom which needs another black relay. 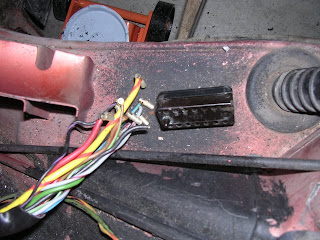 Here is the main factory wiring loom removed from the "multi" connector that attached to the engine compartment fuse/relay board. The connector was easy enough to detach by prying it open with a screwdriver. 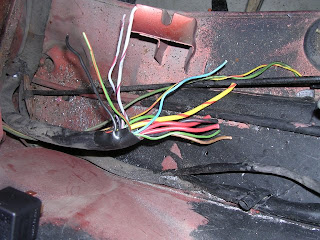 Here's the main wiring loom with several of the key wires separated out to the left. The black wire is the 12V switched line from the ignition. The two grey/red-stripe wires drive the backup lights. The green/red-stripe wire turns on the oil-pressure light in the cabin.

The fifth wire called for in the AC kit instructions is supposed to be black with a yellow stripe for the rear brake lights. The catch is that this wire is NOT in the main loom and exists in the wire bundle beneath it. I'll have to cut open the lower bundle and tap into it so that the regen function of the motor controller will activate the brake lights.

I spent most of today researching the wiring diagrams in the Haynes 914 manual and comparing them to what I see in the vehicle. An interesting note is that the blue wire shown in the picture above actually drives the tachometer when given a bunch of 12V pulses. It would be great to make a pulse generator that gets this working to match the RPM of the electric motor! Maybe I can get the "low-fuel" light to come on when the pack is near depletion. Ah, fun projects for much later days. Onward to crimping connectors on the wires...
Posted by TimK at 8:24 PM