In my eagerness to balance the flywheel, I unhooked all the mechanical and electrical cables from the motor/transmission assembly and lowered it onto a furniture dolly. Note that I still need to borrow the CV joint bolt remover from Craig at Camp914, so the assembly is just sitting on the floor right now. I'll try to describe the process in a little detail since Joe posted a comment a few hours ago asking for more pictures.

First up was removing all the mechanical cables. The speedo cable came off easily. I put the end in a plastic bag to avoid dirt and grit. The clutch cable (which I had just adjusted) took a bit more time and I saved the nuts and stop-wedge in a plastic bag. I had to thread this through the engine mount so it wouldn't interfere with the motor coming down. The shift linkage came off much more easily since I had greased it up and the throttle cable came off too since it was wrapped around the motor. 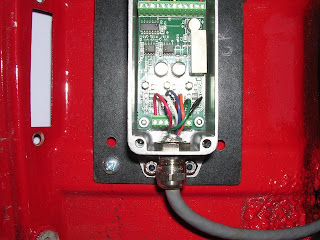 For the electrical stuff, I first popped off the reverse light wiring and tie-wrapped it out of the way. Next came the grounding strap (don't forget that!). The hardest wiring was the speed sensor wiring from the motor.

The picture above shows the speed sensor box opened up. I had to carefully unscrew the wires on the bottom and feed them through the small entry hole and then through the two-inch hole in the wall between the engine compartment and the rear luggage compartment. I also tie-wrapped these in a plastic bag to protect the ends.

After disconnecting a copper bar on the battery pack and pulling off the plug on the Zivan charger (caused sparks before), I carefully unbolted the three thick cables coming from the AC controller. After feeding this thick cable down through the hole in the luggage compartment floor, the assembly was free to lower.

I didn't want to go through the hassle of lowering the whole car to lower the motor/tranny, so I took a different approach. First, I put the rear of the car up on six-ton jackstands. Then, I removed the rear tires to give myself more space to work.

Since I have two floor jacks, I put one under each end of the front motor mounting bar. With the jacks pressed against the bar, I could remove the mounting bar bolts and slide a furniture dolly under the motor. I had to slide the dolly forward quite a bit and put a 2x4 across the end so that the other end of the dolly didn't crush the clutch cable bracket when it was lowered. I then slowly lowered each of the floor jacks on each side little-by-little until the motor mount sat on the 2x4. I had to remove the white cups from the floor jacks so that the raising surface was low enough to get the motor mount arms on to the furniture dolly. 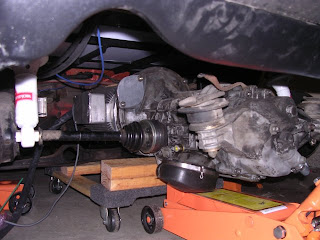 Note the blue reverse switch wire in the upper left of the picture, the grey speed sensor cable off to the left and the thick black AC controller cable on the left. (Click on the picture for a larger version)

I performed all the above work in about two hours. This is far faster than the 1 week it took me to lower the engine/transmission in the first place. Things go much faster when you do them the second time. I'm a little surprised at how much I've learned in this process.

Next up: finding a CV joint bolt tool, removing the flywheel and balancing the whole thing.
Posted by TimK at 9:11 PM

You can usually find one at a good autoparts store. It's an 8 mm (one of the 3 stores in our town had them). I'd send you mine, since my bolts are actually hex wrench for some reason, but I assume you want to get to it quicker than that. I'm about to attach my clutch and flywheel to the engine, so I hope I can learn from your trial and error.

Hi Steve, please read my next blog entry as it might help you with the adaptor hub. Make sure you feel behind the adapter to verify that it is on straight. Mine was tilted only by 6 mils (thousands of and inch) and it got amplified out to 30 mils at the edge of the flywheel. Good luck!
Tim