Getting the EV Back to the Shop and Fixing Electrical Stuff

Just before noon, I drove with the ICE vehicle over to the 914, charged the accessory battery with jumper cables for about 20 minutes, then quickly drove the 914 back home to the garage for repairs. Since the stranded EV was only 2 1/2 miles away, I walked back to the ICE car and drove it home too. Since the DC-DC converter was blown and I didn't want to deal with it, I focussed on some other electrical problems I'd been having.

The first issue is that I get major voltage drops when I turn on 12V accessories like the headlights and the turn-signals. Because the accessory battery is now in the front of the car and tied directly into the fuse block, the actual current path to the ignition switch (and the lights) goes from the fuse block all the way back to the original 12V battery position (see step VI.F.7 in the kit instructions), through a bolt connecting the large red wires, and then back to the ignition switch. The accessories were causing the voltage to drop at the main accessory battery, but I noticed an additional 1.5 volt drop from the wire resistance going to the back of the car and front again.

To fix this, I found the two thickest red wires under the fuse block going to the back of the car. I cut them both near the firewall and used an ohm-meter to figure out which one went to the ignition switch. I then added a yellow 1/4" quick-connect connector on the end of the ignition switch input routed it along the wiring loom and plugged it directly into the fuseblock where the other thick red wire came from. This eliminated the 1.5 volt drop from the long wiring and the 12V system is much happier.

The second issue I wanted to address was the lack of a heater/cooler fan blowing out the ducts. To get at the contacts which turn on the blower motor and fan light, you simply remove the ashtray in the center of the dash all the way (press down on the center clip). 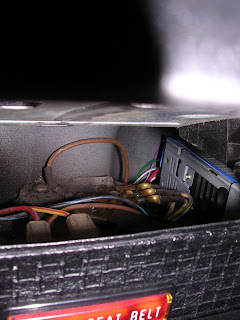 Here's a look into the ashtray hole down onto the electrical contacts (just behind the black/blue and brown wires near the center of the picture). These didn't seem to work at all, or only intermittently. I globbed a bunch of dielectric grease onto the contacts and used a long flathead screwdriver to scrape away all the corrosion and carbon buildup. There was a tremendous amount of dust and other dirt in there that I cleaned out with an old worn-out toothbrush.

After all that scraping (the dielectric grease acted somewhat as a solvent too), the fan operated at all three speeds and the fan light lights when the fan goes on. The next step for the climate control system will be to add hair dryers to heat the cabin. Unless I come up with a better idea, I'll probably tie the hair-dryers directly to the 144 volt system through relays controlled by the rear-defroster pull-knob.
Posted by TimK at 10:07 PM