This has been one heck of a week. I took the flywheel into an automotive machine shop to balance along with the attached clutch assembly. In the meantime, I tried to figure out if the real problem was the motor to flywheel adapter from Electro Automotive. 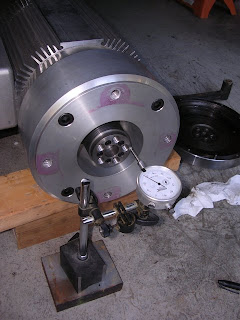 I borrowed a precision dial gauge from a coworker and measured the wobble on the motor adapter. Initially, it had a full 7 mils (thousandths of an inch) of difference in depth. After trying to alter the tilt by tightening down the two screws on the high side first, I got that down to 4 mils.

Turning the outer hub of the adapter had absolutely no effect, so it must be a problem with the inner mating cone. I filed down the motor shaft key and that had no effect. Only using a semi-round file on the inside of the cone (that touches the motor shaft) under where the key rests started to move things out of tilt. After much filing on the inside of the cone, I got the face of the adapter to tilt less than 1 mil, so I was happy with that. 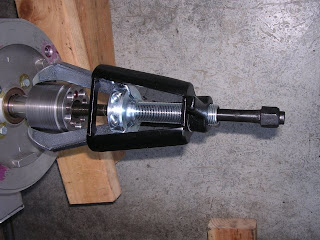 In order to adjust things and remeasure, I purchased a 7-ton gear puller (with posi-lock) from Sears for $70. It worked remarkably well at popping off the adapter from the motor shaft with minimal effort and no possibility of damage to the threads on the inner cone of the adapter. I had to pull this thing off about twenty times to finally get the adapter face flat, so the $70 was well worth the effort.

One person suggested I send the adapter back to ElectroAuto since the cone was flawed. Quite frankly, they aren't responding right now and with NEDRA happening tonight, I was just too impatient to wait (possibly for months) to get a new adapter... 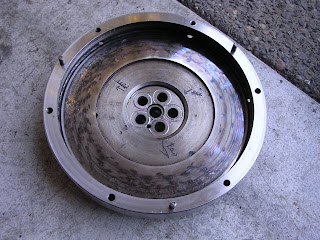 Here's the modified flywheel back from the shop. The backside was slimmed down to reduce weight and the starter motor teeth were removed to save weight as well. The markings in the middle are my own when figuring out the high and low spots. 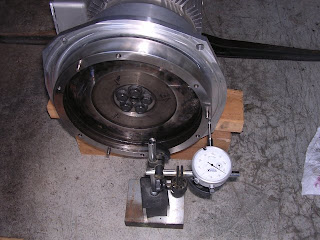 With the adapter face now within 1 mil of depth, I put the flywheel on in several positions and it's face now moves in and out only 4 mils. That's acceptable for now. 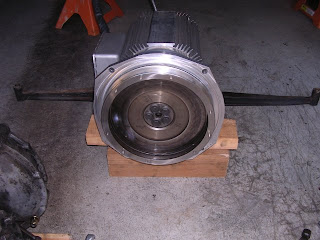 KIDS: DON'T TRY THIS AT HOME. I attached the motor with flywheel up to the AC controller to see if it would vibrate when I got it up to 5000 RPM. By tuning back the torque and maximum RPM in the parameters of the controller, I safely spun up the wheel to 5500 RPM with nowobbling and very minimal vibration. In the picture above, the flash of the camera makes the wheel look still, but the clutch alignment pins on the outer edge are a bit of a blur. 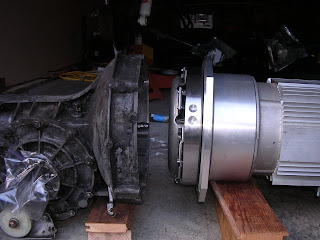 With things balanced, I finally mated the motor/flywheel/clutch assembly back into the transmission. Notice the flywheel has no teeth and has just enough diameter to hold the clutch pressure plate. Also notice the two drill divots in the side of the flywheel that the shop drilled to balance it. 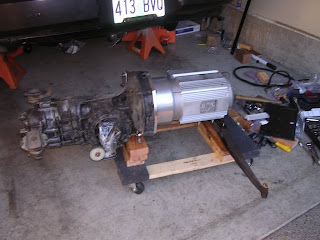 Here's the assembly on the furniture dolly. When I removed this from the car, there was only one 2x4 under the front motor mount. I realized that there is enough clearance to use two 2x4s and it puts the whole assembly closer to the underside of the car when I jack the motor/tranny into place. 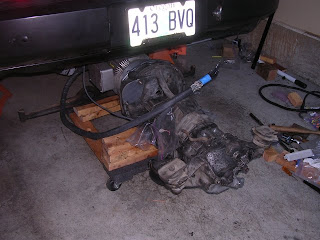 Here it is again, ready for insertion. I taped up the shielding on the 3-phase AC cable to keep the end from fraying. 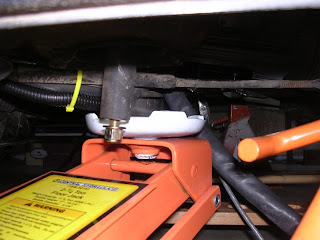 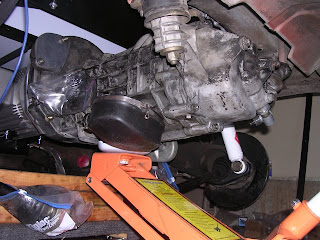 After re-attaching all the other wires and mechanical cables, I fired up the AC motor again and spun it up to 5500 RPM. What!!??? The car still vibrates!!

I think I've been barking up the wrong tree for the past few weeks. Since the electric motor is directly bolted to the front motor mount without any rubber engine mounts, I highly suspect that the 914 chassis has a resonant frequency around 5000 Hz and the light vibrations from the electric motor are stimulating it.

I'm taking the car to show off at NEDRA tonight anyway. I never get up to 5000 RPM if I stay in 2nd gear in neighborhoods and 3rd gear on the freeway.

Next up: Finding rubber mounts to add to the system to see if that helps things out. Grrrrr.
Posted by TimK at 2:31 PM

EA may be going through a "learning curve" with the adapters for the AC setup. I don't believe they have many on the road.

The adapter for my DC Impulse9 (WarP) fits beautifully and turns true.

I'm sorta surprised and sorta not surprised that EA is not responding to your requests for help. They have been, generally speaking, quick to respond with "work stopping" construction issues, which have been few. My latest issue, a relatively minor wiring problem, is being ignored, even after multiple repeat inquiries.

I have written to them several times about their communication situation and suggested thay "get on it," as bad PR travels fast, far and wide.
Roger
http://www.96-volt.com

I'm in a jam, myself, and it's going on 2 weeks and 2 polite e-mails without any response from EA. They tend to tune out for awhile and just when you think they've taken the money and headed to Tahiti, they e-mail you back. So I remain hopeful.
Tim, pehaps you have the same problem as the old Harleys that really vibrated at higher speeds (With deference to Harley owners that think that's a good thing). HD started rubber mounting their engines a few years back and they don't vibrate much anymore. Maybe a few rubber strips between the mount and the engine would take care of the vibration.

I wanted to thank you for all the pictures, the engine assembly looks much cleaner than I had hoped for. I realize that juggling a hundred pounds of engine and tranny, and stopping to take pictures is not ideal.