Well, today was quite productive. My friend Nicole came over for a few hours to help me finish the transmission and put the motor/transmission together.

While rummaging through my bolts last night, I discovered that I had forgot to install the flywheel bolt plate and had just put the bolts right into the flywheel. While this might not have been fatal, I'm really happy that I was able to take out the bolts (rather hard with red loctite) and install the proper plate. 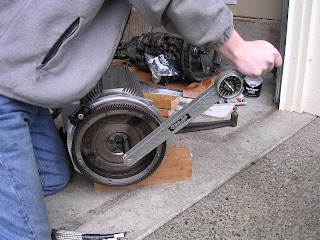 Here's me torquing down the flywheel bolts again (80 foot-pounts!) after putting the proper plate in underneath the bolt heads. 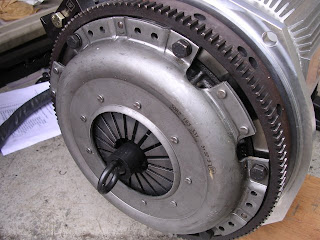 With the flywheel on, I could now attach the new clutch assembly. Thanks again to Pat for letting me borrow his flywheel lock and clutch centering tool (pictured here). One mistake I made was to not push the centering tool all the way in, so the clutch was off-center by a few millimeters. After realizing this, I loosened the six clutch bolts, pushed the tool all the way in (as shown in the picture) and tightened downt the bolts to 18 ft/lbs. 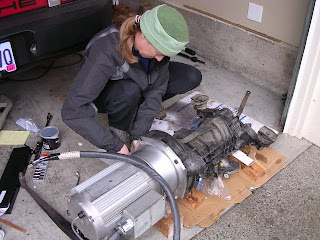 with the flywheel and clutch on, Nicole and I used 2x4s and other shims that I got from Pete to line up the motor and the transmission. After maneuvering the two together, it was easy to bolt them tight. Here's Nicole putting in the bolts for the motor adapter plate. 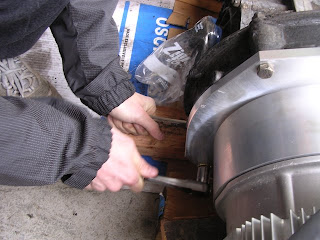 Tightening the bolts with two wrenches to keep them from turning in place. 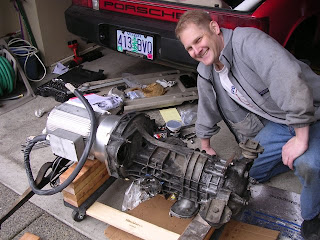 Here I am with the assembled motor/transmission with lots of 2x4 spacers on top of a 1/2 ton furniture dolly. Note: the kit instructions mention that the bolts that tie the motor mount in the kit to the front Porsche motor mount are 3 1/2 inches long; however, I think this is a typo because I had to go back and purchase 2 1/2 inch bolts because the 3 1/2 ones were almost exactly one inch too long. 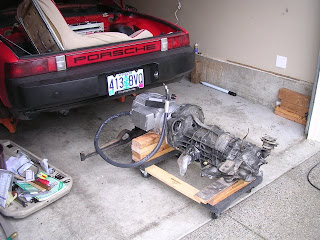 Since I don't have a transmission jack, I chose to put the motor back in the car the same way that I removed the gasoline engine. Here's the motor on the furniture dolly ready for insertion. 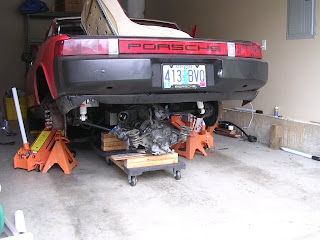 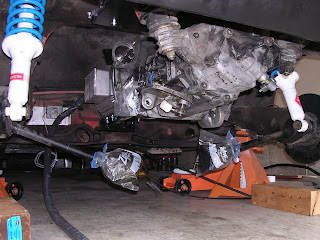 This acutally worked rather well, and I was able to get the motor inserted into the chassis with little physical effort. I did have some tenuous moments when I needed to insert the mounting bolts with nothing but the two floor jacks holding the car up. Most people would not recommend doing this, but I took the chance. Notice that I did put 4x4s under the rear suspension swing arms as a minor safety measure.

One more quick note, ParkRose hardware had all the bolts I needed for this; however, make sure the hardware you get out of the trays is actually the hardware you're looking for. I had to make another run to Parkrose today because one bolt from the proper bin was 1/2" too short and another bolt was the proper length, but had the wrong thread size (fun).

Update about wiring harness parts: Shari from ElectroAuto got back to me today and clarified that she still needed to send me two more six-place terminal blocks as the instructions mentioned to fill out the proper kit parts. I still have many other things to work on in the meantime, but it's good to know that I wasn't totally confused with the last shipment.

Off to go enjoy some hiking out in the sunshine for the rest of the weekend...
Posted by TimK at 4:21 PM