I cringe at the thought of having to send anything back to Electro Automotive for replacement or repair, so I took a chance and dissected the DC-DC converter to see if I could fix it. The company that makes the DC-DC converter is CC-Power in the UK, so I don't think sending it back to them would be timely either. 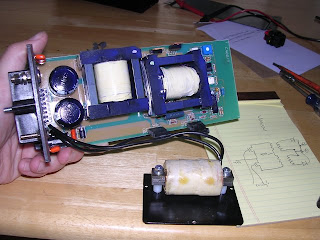 Here's the DC-DC converter taken out of its black aluminum case. The clips that held the FETs and diodes in place were a bit annoying to take off, but I finally got them with some needle-nose pliers. The circuit is basically a heavy-duty buck step-down converter with a bunch of inductors. The output stage is a transformer in push-pull configuration with two diodes to handle both sides of the coil. An opto-isolator takes the output and transfers a reference current back to the primary stage to regulate the voltage. 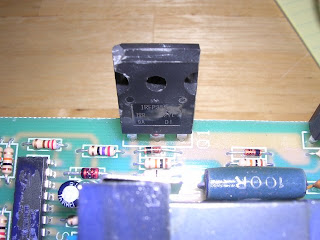 Here is one of the two IRFP350 FETs that clearly blew up. If you look closely at the burn marks, there is even a hole blown in the part package. Both FETs had blown and were shorted out. Since the FETs are rated at 16 amps and the fast-acting input fuse was rated at 5 amps, I suspect the FETs sustained damage from a high-voltage spike that went past their 400 volt rating. 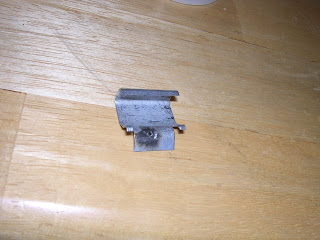 The explosion from the FET shown above was so powerful, it even blew a hole in the steel clip that held it against the heat sink. (I'm glad I wasn't around when it blew!). 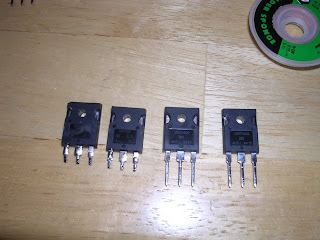 I went on a quest this evening back to the labstock at my work and found some IRFP460 FETs in the same package. They are rated for 500V and 18 amps instead of 16, so I thought they would be a good replacement. Heck, I might as well at least try since I probably voided the warranty when I opened up the case. 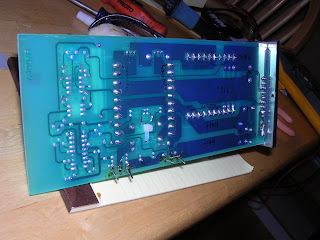 Here is the DC-DC circuit board with the new FET leads sticking out the bottom edge for resoldering. The middle lead is tied to the back of the FET, making it a good heatsink and difficult to solder without creating a cold solder joint.

Okay, I did a quick assembly without heatsink clips and attached the 144 volt pack to the input with a new 5-amp fast-acting fuse, and voila, the DC-DC started working again. So, I went back and did a full re-assembly with putting the heatsink clips back on and attaching the 12V accessory battery. The DC-DC seems to be working fine again. It creates a small whine unlike the blown unit before and it puts out 13.9 volts to charge up the accessory battery.

I have no idea why or how the DC-DC converter blew, but I suspect it will probably happen again given that I've only really driven the car for four days. As long as I check the fuse I'll know if it went bad or not. The red LED on top of the DC-DC converter lights up with a 12V accessory battery attached, even though the unit is blown, so I can't rely on that. Based on an idea from Ross Cunniff, I could rig up an op-amp comparator circuit that lights up the the generator warning light whenever the 12V accessory battery is below a certain threshold. That way I know the DC-DC converter isn't working and I can check it out. The other idea is just to add a green LED to the 144V inside the converter just past the fuse so that I can see at a glance if the fuse has blown. There are many other projects that I'd like to do first though, so for the meantime, I'll just periodically check the DC-DC fuse.

Tim: I am using the same "CC Power" DC/DC converter as you are. (C400) After reading this current blog entry, I checked my converter, this morning, and guess what: BLOWN FUSE! I was wondering why my aux. battery kept running down! Fortunately, the only things that depends on the aux. bat., in my installation, are the lights, radio and relay coils. I suppose the battery could get quite low before it caused the car to quit.

It now seems obvious that there is some kind of basic problem with the CC power converter or with the way EA has it installed. I don't know how much you paid for your's, but I paid $580 ... and that is TOP BUCKS for such a unit! I am not going to "eat it!" No Way!

My next email, this morning, is going to Mike & Shari at EA and pointing out the problem I have and suggesting that you have a similiar problem. I am going to DEMAND a refund or reliable replacement ... ASAP.

I suggest that you do the same ... Let's stay in touch on this subject.)

BTW: The CC Power web page
(http://www.ccpowerltd.co.uk/dcdcconvertors.htm#3)
lists the input voltage as 80. This may be one of the roots of the problem and if so, EA should not have provided that unit as a suitable piece of equipment.

I actually got an e-mail from Mike at ElectroAuto last night offering a replacement and a chat on the phone; however, I probably voided the warranty with the repairs. With the upgraded FETs, I'm going to try and "blow the fuse" today by turning on the accessories and see if there's still a problem. When I got the CCPower DC-DC converter, the box did say that the input voltage was speced for 144V nominal. I suspect ElectroAuto worked with the company to provide a custom unit. There are two potentiometers inside the case that adjust the output voltage and the output current. Perhaps tweaking those would also help with the problem.

I'm still going to try and talk with Mike about the car vibrations to see if he has any suggestions...