Well, this day definitely had its ups and downs. The PakTrakr battery monitoring system I was expecting early next week actually showed up today. 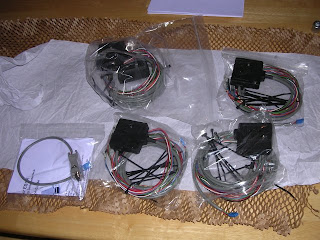 Here's the PakTrakr still in all its bags. The main display and one battery monitor unit is in the upper-left bag. Three extension battery monitors are in the other three bags. The serial cable in the lower left can hold 2MBytes of log data before dumping it down to a laptop. Each monitor can handle six batteries. My vehicle has 18 batteries, but I chose to purchase a total of four monitors due to the distribution of batteries in the car. This means more cost, but far less wiring and installation hassle.

Okay, on to the gritty part. I dropped a bunch of leftover parts at camp914 today and picked up the 12-point CV joint bolt removal tool from Craig. After removing the CV joints, I rolled the motor/tranny out from under the car and wiggled off the transmission.

After close inspection of the flywheel, it looks like it wobbles about 30 mils (thousands of an inch) which could be causing the problem. I unbolted the flywheel and used a piece of plastic rubbing against the hand-spun adapter hub to see if it was unbalanced. Unfortunately, the adapter hub from ElectroAuto was tilted to one side about 6 mils. This may not seem like much, but this tiny distance gets amplified through the radius of the flywheel up to 30 mils. Just to make sure the flywheel wasn't tilted on its own, I put the flywheel back on rotated approximately 180 degrees. The tilt was still 30 mils and it followed the tilt in the adapter hub, not the flywheel rotation, so now I know it's a problem with the adapter or the AC motor shaft.

After removing the adapter plate and large heavy spacer ring around the adapter hub, I found that one edge of the wedge inside the hub was slightly more depressed than the opposite edge. This is a bit of a relief because it points away from the shaft on the AC motor being bent. I had to use a 7-ton gear puller from Sears (model 104 Posi-Lock) to pull off the adapter hub.

The instructions say that you can remove the adapter by backing out the small allen head bolts and rapping them with a brass hammer. After slightly backing out the bolts, only a few threads were still in the adapter hub, so hitting them with a hammer only broke off the threads. That's why I had to resort to the gear puller. I'm quite surprised that ElectroAuto suggests using allenhead bolts for the hub that are only 3/4" long. The threads are much deeper. Since I damaged the shallow threads, I'm going to mount this again using 1" bolts instead.

Make sure you do NOT put Red Loctite on these small allen-head bolts like it says in the instructions. The flywheel prevents them from coming out and the loctite simply glues the wedge inside the adapter hub tight so you cannot remove it! (my bad) 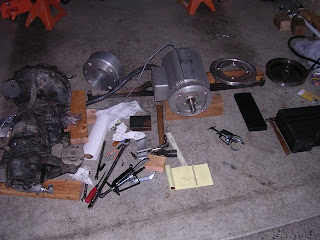 Here's the mess after I took everything apart. 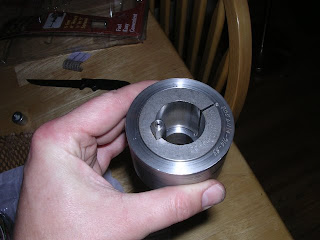 The object of my frustration: the adapter hub. The left edge of the inner wedge seemed to pull in 6 mils further than the right edge. I'm going to screw in the bolts on the right edge (near the slot) first to see if I can compensate for this tilt.

Next Up: Having the flywheel balanced and lightened at a machine shop.
Posted by TimK at 8:45 PM

Tim, I think you have a defective adapter and should contact ElectroAutomotive about it. Mike gave me two longer bolts when I picked mine up, and showed me how to remove it using the two long ones, NOT the short ones that hold it together. Loctite will never work as a shim, it's designed to harden in the pressure of threads not in "large" spaces...

Thanks for the suggestion. I'm going to try some experiments today where I rotate the outer hub piece around the inner cone piece to different positions to see if that flattens things out. If not, I guess it's back to ElectroAuto. Cheers.