Taking a Day off to see the EV Show

I took the day off to walk around Portland to the farmers market and EV awareness day with Krista. There were probably twenty electric vehicles at EV awareness day. Here are just a few of the more notable ones. 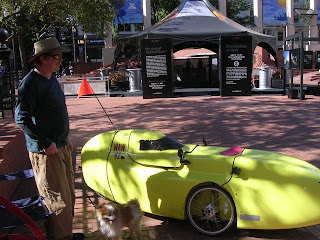 The electrically augmented bicycle. This was originally just a human powered vehicle made in Belgium, but the owner added an electric motor to power the rear third wheel to get up the hills in Portland (of which there aren't many in Belgium). 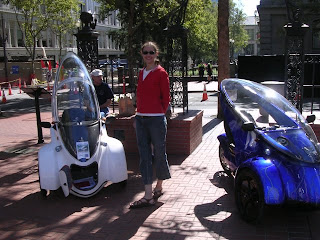 Here are some cool looking Neighborhood Electric Vehicles (NEVs). They run on 48 volts and the company sells them as a kit for about $3500. With batteries and additional items, the final cost is around $5000. Not bad for something that has a top speed of 50mph. 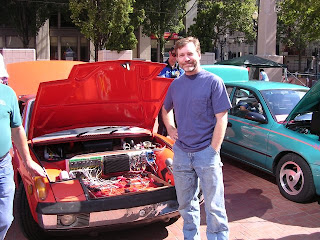 Here is my (tongue in cheek) arch nemesis John Benson. He built the DC version of the Electro Automotive kit awhile back and challenged me to a drag duel at Nedra next week. Based on my experience with acceleration, he'd toast my AC 914 in the drag race, but I'd win in an endurance race.

Next Up: Tweaking the adapter hub and trying out the PakTrakr
Posted by TimK at 8:48 AM

I've been looking at my adaptor plate and the tapered hub and have a couple of things that I'm going to check when I install it and might be worth looking at for you as you try to resolve this problem.

My spacer doesn't doesn't seem to have enough of a chamfer to seat flat in the bottom of the adaptor plate. In machining there is no way to have a dead sharp inside corner so a chamfer is put on the outside corner of the mating part. This can be checked using a .002" feeler gage and seeing if it fits in between the 2 parts. Check every 90 degrees as it may fit on 1 side and not the other.

The other thing is outer tapered part has a "dot" stamped on it for orientation with the slot of the inside tapered part. On mine this is stamped close to the inside on may change the way it seats. this could be the reason it seats better now. Most the time the parts are assembled and then turned so there are trued then the other features are added based on the trued portion.