Closing the Boxes and Fixing the Suspension

I took a few minutes (just a few) to go out with friends to celebrate. 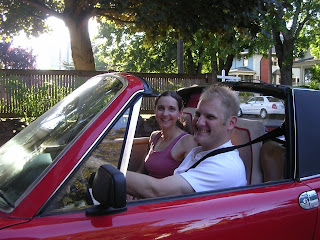 Here's my girlfriend Krista enjoying a very brief ride to the bottom of the driveway. The front tires still bottom out when I turn the wheels too hard, so I'm holding off major test drives. 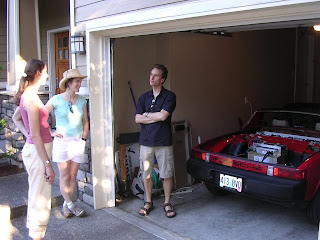 Here are my friends (Krista, Ruth and Rick) just before we went walking to get some gelato on this fine day.


Okay, back to work after a good night's sleep. My first concern was the front of the car bottoming out. Fortunately one of the steps in the manual is to adjust the front torsion bars.
The Haynes manual covers this reasonably well.

The center of the torsion bars were supposed to be about 8.5 inches off the ground. Initially they were 5. No wonder I'm having issues. 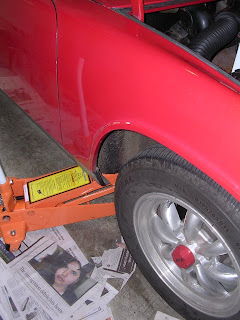 Turning the torsion adjustment bolt was far too difficult with all the weight on the tires, so I jacked up each side of the front of the car and tightened both bolts until the center of the torsion bar was about 8 inches above the ground (after letting the front end back down). 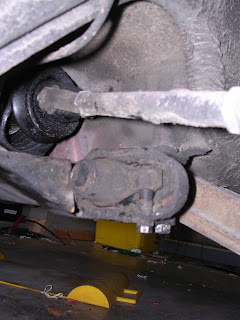 Here's a closeup of the torsion adjustment nut. Its the nut on the very bottom that turns the vertical bolt that you can see the threads on. This picture was taken tooking toward the front of the car from just behind the front-right tire. 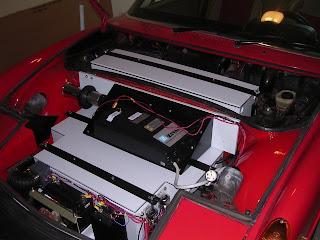 Next step was to finish the battery box covers. Here are the covers and hold-down bars in place for the front two battery boxes. For the rear bar on the front battery box (under the charger tray), the holes for the bolts line up exactly with the vertical walls of the cups on the bottom side of the cover (at least for the bar I was given). I had to re-drill these holes about an inch further out to the side to not interfere with the internal hold-down ups.

The hold-down cups on the bottom of the middle battery box interfered with the tabs on the speed-caps for the batteries. I took my cable cutters to one of the two tabs on each speed cap to fix this issue. 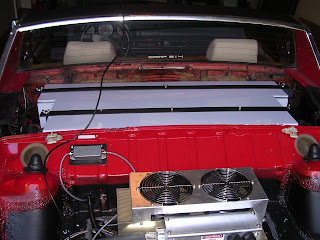 For the rear box, the lid was too big to fit between the passenger wall and the rear luggage wall, so I had to use vise grips to bend the rear luggage wall back about 1/8" so the lid would drop in.
I also had to knock off one of the hold-down cups on the bottom side of the lid because it interfered with the fusible link that I modified to fit around the speed-caps. With the other hold-down cups in place and the copper bars holding the batteries together, I didn't feel that this would be a huge safety issue.

The black wire going up over the roof of the car is the serial cable going to my laptop in the passenger seat.

After a few more test drives around the block, I've noticed that the controller tends to cut out suddenly under a heavy torque load. I can get the controller to die just by putting the car in reverse and flooring the pedal to leave the garage, so I don't think this is a reasonable limit. I'll be researching all the parameters again to see if there are some "unreasonable" limits I can increase without harming the system.

Next Up: Putting all the lids back on!
Posted by TimK at 4:21 PM

Hey Tim, Do you think the rear battery top not fitting may be because the battery rack was installed to high? The instructions don't give a height when drilling the rack to the support arms. I know you had trouble getting the second half of the battery box in. Just seeing if I can try something different to improve the problem. Matt

I didn't really have much control over how high the battery rack was since the vertical struts bolted to the swing arm determined most of that. The tolerances for the rear battery box were quite tight so a mere change in 1/8" between the passenger and trunk walls would have caused problems with the box and lid fitting. The left side seemed to fit much better than the right side, so perhaps the vehicle has "sagged" or got into a minor accident.
I found the quickest way around the problem was to use a long lever to carefully bend the rear trunk wall rearward along it entire length to free up space.
Have fun with your conversion!