The instructions for the AC kit tell you to slide the motor speed control box through the two-inch hole that was cut in the wall between the engine compartment and the rear luggage compartment. In my haste, I added a computer grommet to the hole which made it just a bit too small to slide the motor control box through. I initially thought I could remove the base and cover of the box to reduce its cross-sectional area, but it still wasn't enough. Eventually, I decided that I would have to completely remove a cable from the box and just route the cable through the hole. 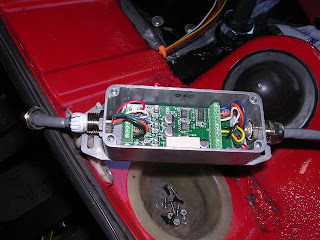 Here's the AC motor speed control box with its base and cover removed to see if it fit through the two-inch hole. It did not. 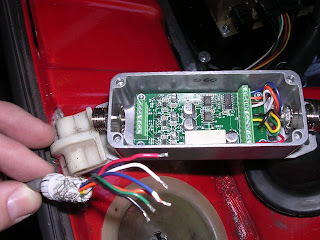 After carefully recording which color wire went to the terminals, I removed the cable from the motor end of the box. 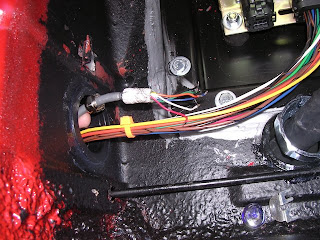 Here's the cable going through the too-small two-inch hole. 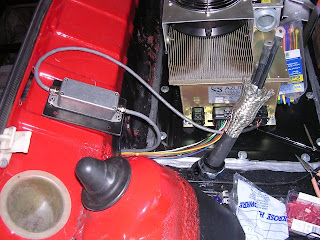 Here's the motor control box all reassembled next to the controller, ready to be held in place by rivnuts or bolts and nylock nuts. 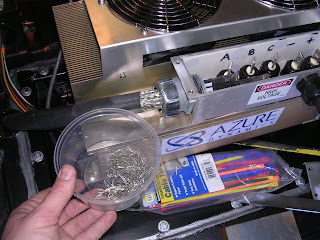 The next step was to attach the three-phase cable to the controller. This was quite a bit harder than I expected. A slight difference in the cable lengths made attaching the three lugs to the controller outputs difficult since the cables were rather thick and inflexible. I had to trim the copper webbing surrounding the cable. I used simple diagonal cutters with a small plastic bowl underneath the cable to prevent tiny webbing wires from splattering everywhere. 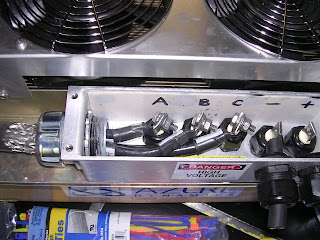 Here's the three conductor cable tied to the three internal lugs. The cable for the far right lug was just a bit shorter, forcing me to wrangle the bundle quite a bit. I'm hoping the strain relief nut on the left edge of the box will prevent more force from possibly cracking the terminal posts. 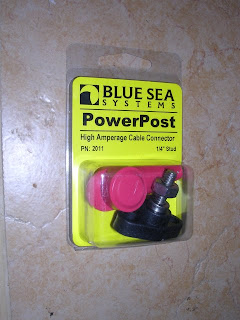 Electro Auto forgot to include the post terminals for the most-positive and most-negative connections in the kit. Since I didn't want to wait for EA to respond to e-mail, I went searching around on the internet to find these things. It turns out that a great source for high-current EV parts is the Marine store. Many people end up wiring up their own boats with high-current circuits, so I'm not too surprised.

I purchased these high-current post connectors from West Marine in Portland for about $9.00. As you might expect, the prices at the Marine Store were very high (about 2x the cable store), but they have a bunch of stuff and they're open during weekend hours when many specialty stores are closed.
Posted by TimK at 2:28 PM