Wiring and Rewiring - Getting Close!

Ugh, I'm dehydrated, exhausted and mad at this inanimate object. I must love doing this conversion... (There's a fine line between a hobby and insanity)

Tonight was spent attaching all the copper bars to the battery terminals. I received an updated wiring diagram for the AC kit from ElectroAuto, and, much to my disappointment, many of the connections went between the battery caps. All the US Battery models tend to have "speed caps", so routing copper bars between caps on a single battery is impossible without breaking the speed caps. So, to use the bars provided, I bent them every which way I could to fit around the speed caps. 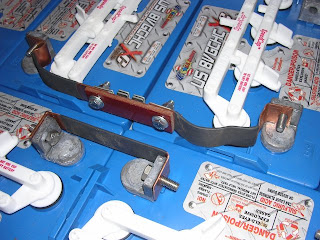 Here's the fusible link in the front battery box. Notice the large bulge in the copper bar on the right half. 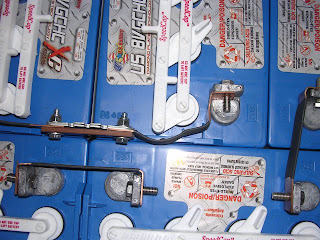 Here's the same fusible link viewed from above. The bulge on the right half is needed to accommodate the opening of the speed-cap. I also had to hacksaw off about 3/32" of the bottom edge of the bar because it sits on the "wrong" side of the battery terminals and needs some clearance for the terminal heads. 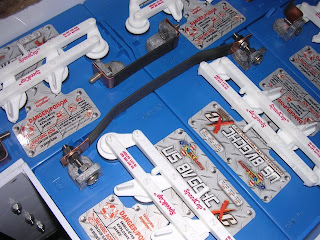 Here's the long copper bar used in the rear battery box. To prevent routing it between the battery caps as shown in the ElectroAuto diagram, I used 2" stainless bolts to extend it beyond the speed caps on the top. I didn't like doing this because the stainless bolts would have a higher resistance than the copper and a much smaller surface area. Stay tuned for a better solution. 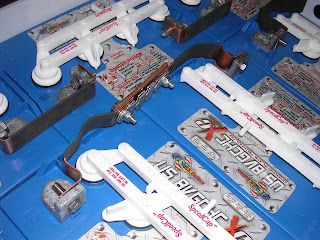 Here's the fusible link for the rear battery box. This is bent identically to the one in the front box and has the same curve on one side to accommodate the opening of the speed-caps. 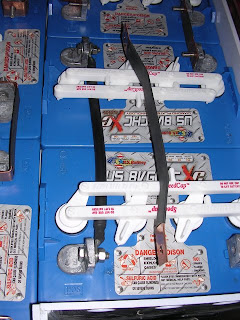 Since the AC kit comes with 2 gauge wire instead of 2/0 gauge wire, I was able to use a short piece of welding cable with two lugs and route _under_ the speed caps to connect the terminals that formerly required the long copper bar. 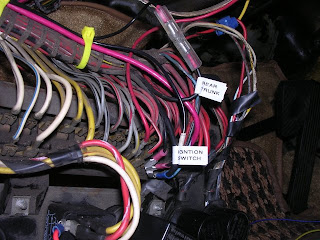 The updated low-voltage wiring diagram shows different connections in the front compartment. I rewired the modification to the fuse block so that all the 12V accessories were connected to the key-switch directly again. I found the black wire going to the rear engine compartment and drove that wire individually from the interlock relay output in the front trunk. Hint: remember the two smaller wires you cut off the large black wire in step ???, the larger of these two smaller wires goes directly back to the rear engine compartment and was used in the original instructions to turn on the AC controller.

In short, we still route two black wires up to the front luggage compartment so that we can activate the keyswitch relay. The only difference is that in one case, the interlock relay turns off most of the keyswitched 12V system and this modification only switches off the AC controller when the charger interlock relay engages.

Electro Auto made the mistake of sending me two 12V-coil relays for the front luggage compartment. One of these was supposed to have a 120V coil so that plugging in the car would shut off the AC controller and turn on the fans. One of the problems with their updated wiring diagram is that when the charger interlock relay is on, all the venting fans are driven by the 12V accessory battery and nothing is keep that battery recharged. If the battery runs out, the fans stop, which is bad.

In short, I'm going to get a small 12V transformer that will drive both the interlock relay and drive the fans when the car is plugged in. This saves wear and tear on the accessory battery and let's me use the 12V-coil relay as the interlock relay. 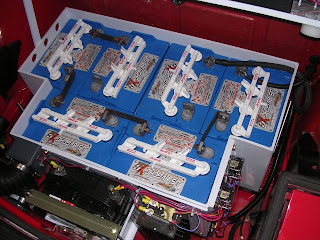 Whew! After much playing around with the anti-corrosion goop, I finally have the front battery box all wired up (except the fusible link) and ready to fire up the system.

Note the thick welding cable coming into the box from the rear of the car. The smaller welding cable goes to the middle battery box and is small enough to fit under the speed caps to prevent clearance problems when closing the front-box lid. 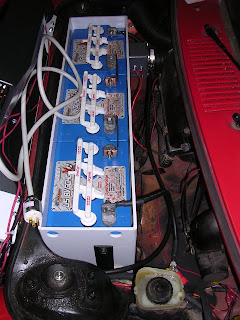 Here's the middle battery box with the copper bars and welding cable installed. 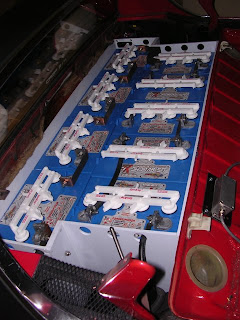 And finally, the rear battery box with all copper bars and cables installed except the fusible link. It's much safer to wire things in when theres a break in the serial battery connections.

Next up: Getting some sleep and testing out the high-voltage system by measuring voltages and installing the fusible links. Not long now before we can try to spin the motor!
Posted by TimK at 11:09 PM

I'm glad to note the battery hookup problem. I'm using the same batteries and am about two days away from installing the copper bus bars from EA.

When I picked up my batteries from the distributor in Spokane, I was told that single caps are available. I'm getting on the phone this morning and ordering them!

Another thought on the battery box fan issue: I have the same issue and will solve it one of two ways: (I'm not sure a small AC, doorbell-type transformer will power the DC fan.)

1) I'll go to Radio Shack and see if they have a similiar sized 110 VAC fan that I can power directly from the interlock relay ... or

2) Buy a small computer power supply that puts out 12 VDC. They are pretty cheap ... probably under $20 on eBay. (I'm not in any hurry, since I can put a small charger on the aux. battery until the power supply arrives.) Another alternative might be found at Wal-Mart in the form of a small "battery maintainer," i.e. an AC/DC converter/battery charger.

Great ideas about the battery caps and the 12V transformer. I plan to pick up a 12V laptop supply from the local computer recycler (FreeGeek). They sell them for about $2.