Working with the Fusebox

I took this morning off from work to continue with hacking the fusebox wiring. 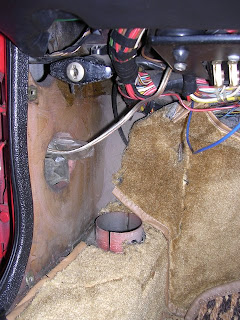 Here is the fusebox area with the left speaker grille removed. I also removed the remnants of the rotten heater duct from the heater opening at the bottom of the picture. 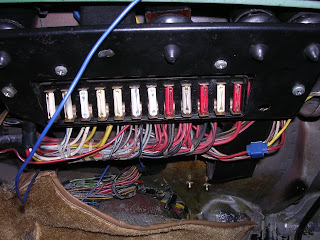 This is the fusebox. To lower it, take out the far left and far right screws in the black housing. Note: the blue press connector on the lower-right powers the after-market CD-player. 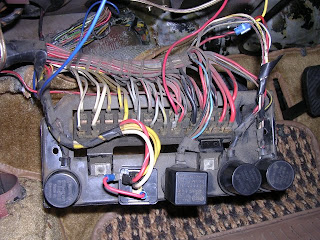 Here is the lowered fusebox. This looks slightly different than the picture in the DC Voltsporsche manual, probably because its a '75 model year. The instructions call for adding a red wire to the second terminal from the right (which is already taken). Fortunately, there are spare terminals behind the one we need to connect to. 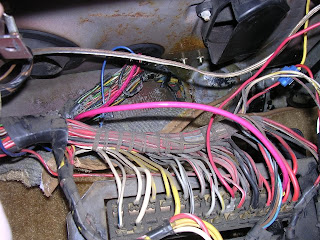 Here is the added red 10-gauge wire in the foreground. It almost looks pink and goes from the fuseblock terminal along the loom up to the grommet towards the fuel compartment. 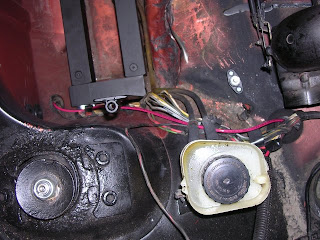 Here's looking straight down into the fuel compartment showing the red wire going from the passenger compartment along the factory loom to the front luggage compartment through grommets. 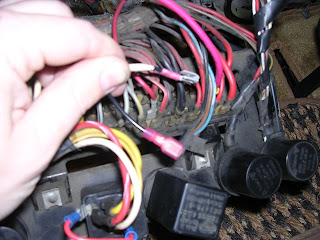 The next instructions call for adding two black wires, one with a piggyback-crimp and one with a regular crimp. The piggyback crimp goes on the wire with the tape. Note, I had to cut off the regular crimp and replace it with a non-insulated one later so that it fit inside the 1-space connector in the instructions. 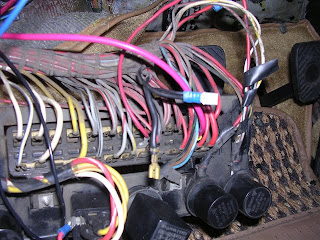 Here are the black cables from the original harness with the two smaller of the three cables cut off and crimped with a blue female connector. 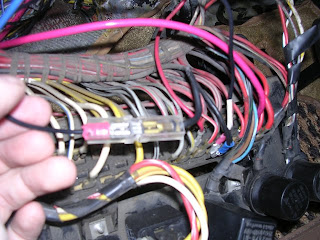 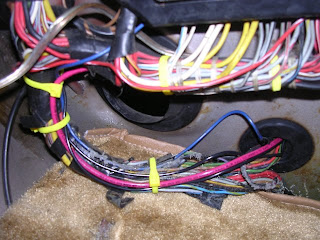 Here is the final wiring with yellow tie-wraps included to keep things clean. The upper-left tie-wrap holds the whole loom to the trunk release housing to keep the bundle way clear of the upper heater duct (see large black hole at top of photo).

After routing these black cables into the fuel compartment and then the front luggage compartment, I'm a bit skeptical that the wires are long enough, but we'll see when the DC/DC converter and charger get added.
Posted by TimK at 10:03 AM