We are Green for 12V Electrical!

Whew! I spent the evening debugging the small sparking issue I ran into yesterday. The behavior was interesting in that the keyswitch relay closed for about a second and then released. In the process, the DC-DC converter turned on (indicated by red LED) and then slowly decayed to the off state.

When we attach the black wire in step XXV.R of the DC instructions, it drives the keyswitch relay coil instantaneously with 12 volts, energizing the coil. Current flows through the coil to charge down the capacitive load on the ignition switched 12V rail until it is 12V below the unswitched rail (down to zero volts). After the coil charges down the capacitive load, there isn't enough voltage to keep the coil energized and it turns off after a second. I suppose this is rather confusing, so send me a comment or e-mail if you'd like further details. 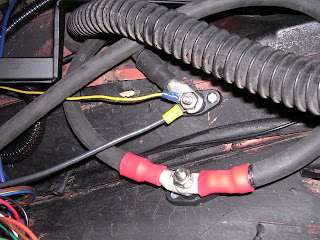 Here are the negative high-voltage connections. The 10 gauge black wire comes from the charger and the smaller yellow wire drives the voltmeter in the cockpit and drives the DC-DC converter. 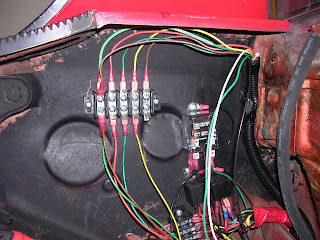 Here is the wiring from the 9-wire bundle that was threaded through the driver-side heater duct. Most of the wires attach to the upper terminal block to interface with the DMOC AC controller. The dangling white and green wire go to the ammeter shunt and the dangling black wire I think is not used in the AC kit. 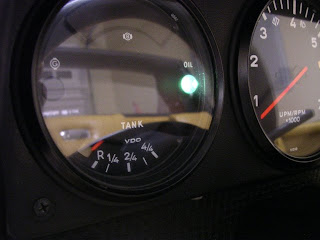 The moment of truth! After attaching all the wires and chassis ground in the front luggage rack, the green oil light comes on (and the annoying seat-belt buzzer) when I insert the key and turn it to the "on" position. I was also able to turn on the CD player and it started playing the CD I had left in there from when the car had a gasoline (yuck!) engine. Yay! This marks a rather huge milestone in getting most of the wiring hooked up correctly.

WARNING: Step XXVI in the DC instructions doesn't really apply to the AC system as many of the connections are much different. You can definitely test the green oil light, but don't short out any terminals as mentioned in step XXVI.G!! 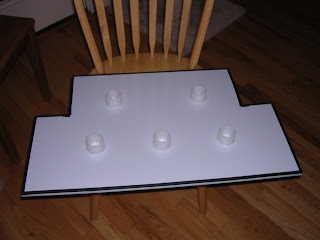 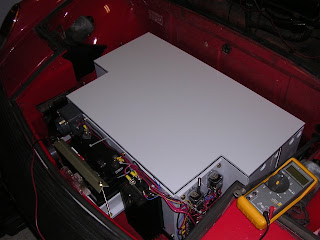 Here's the battery box top sitting in place. We need this here to install the charger mount next. 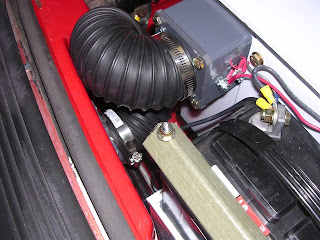 We also need to add the flexible plastic pipe for the front battery box vent fan. Trust the instructions when they say that installing the upper hose clamp is easier.

Next up: Installing the mount for the charger.

Well there’s your problem, right there. You’re out of gas.