This was a big evening of figuring out how to remove the transmission with one person. 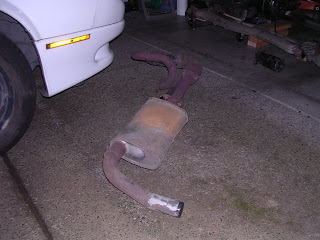 First up was removing the rear portion of the exhaust system, shown here next to my trusty 34mpg 1994 Saturn. (Someone else converted a '94 Saturn Wagon to an EV, but I'll keep mine!) 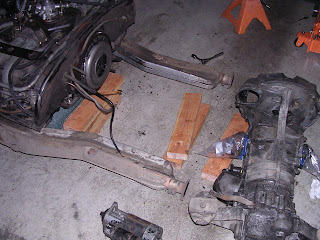 Here is the removed transmission. I'll try to take more pictures as I go next time to document the process better. Notice the 2x4 blocks on the ground to hold up the transmission so that it doesn't stress the driveshaft with the bolts removed. 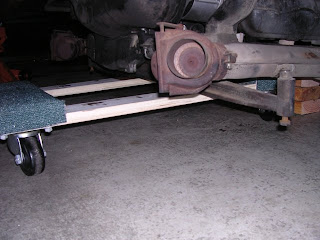 After removing the exhaust, I slid the engine over on the furniture dolly so all the transmission points were on blocks outside the dolly. Note the stack of 2x4s on the right edge of the picture to hold up the transmission half of the engine. 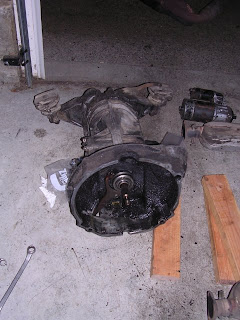 Here's the removed transmission on the ground. The inside is covered with black grease. I wonder if there's a leak somewhere. Note that there are still plastic bags covering the transaxle openings that connect to the CV joints. 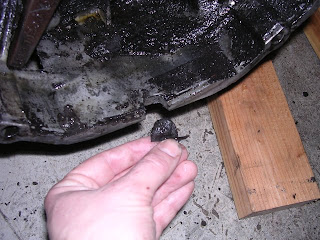 Interestingly enough, there was a "plug" of something that filled in this notch in the bottom of the transmission. I'm not sure why it was there. 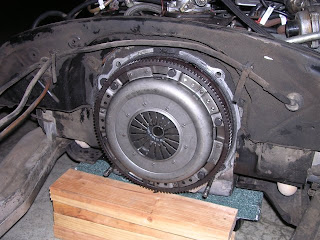 Here's the engine half of the two pieces. The clutch looks darn near brand new with very little wear. I'm selling the engine to someone in Corvallis and they'll get this great clutch since I've already purchased a new one as a replacement. My only concern is that I'll be taking the flywheel for the EV conversion. That'll knock off a buck or two off the selling price.

Again, note the two transmission bolts at the bottom of the flywheel jutting out and the stack of 2x4s to hold up the transmission so it's removal doesn't stress the driveshaft. 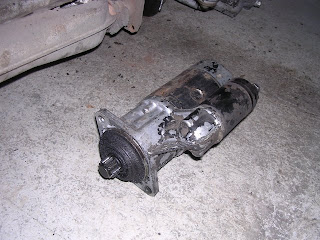 Acutally, the first thing out, even before the exhaust, was the starter motor. 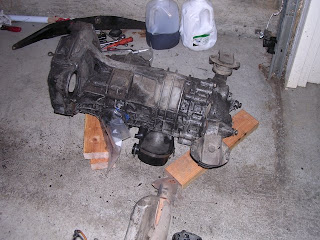 For storage of the transmission, I supported it on blocks to prevent the clutch pulley, shift linkage case and speedometer connection from supporting any weight.

I looked at possibilities for removing the front motor mount on the engine that I'll need for the conversion, but it's looking rather nasty.