Busy Day - Time to get your WooGah On

Whoosh! Despite being exhausted from yesterday, I got up early this morning and just cranked through a bunch of EV stuff on my day off. 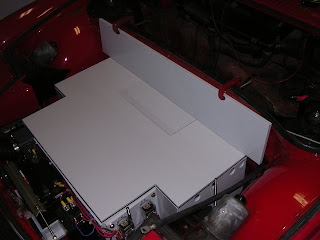 Here is the board that the charger tray mounts to. There's a clear piece of acrylic providing a small gap so that the board can hinge forward and upwards without any edge interference. I'm holding this in place with clamps so I can drill the hinge holes without the board moving around. 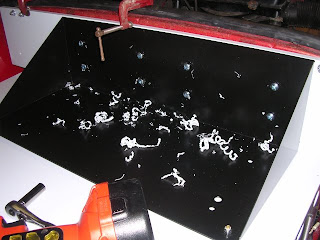 After drilling the hinge holes, I went ahead and drilled the eight holes to hold the charger tray and filled them with bolts. I mounted the tray as far to the right as possible to open up space on the board to the left for one of my favorite pieces of equipment on the vehicle: the WooGah horn. Note: The AC kit instructions don't say what to install the charger tray with. I used one inch 1/4-2o bolts with washers and nylock nuts on the back. 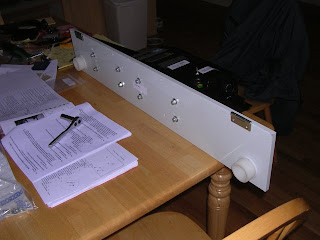 Here's the mounting board on my kitchen table (er, workbench) with the washers and nuts installed on the back to hold the charger tray on. I've also bolted on the two hinges at the top edge as well. 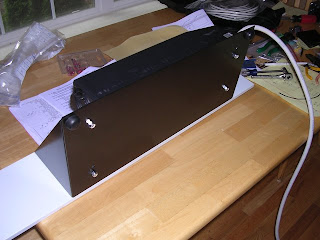 Here is the bottom of the charger tray. I had to choose very shallow countersunk 1/4-20 bolts so that they wouldn't protrude beyond the black rubber feet on the top two corners. Alas, the rear two nuts were still too thick and I had to countersink the bottom and install the flathead bolts from below to get enough clearance. 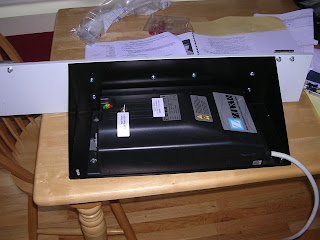 Here's the Zivan NG3 charger sitting nicely in its tray with the AC power cord off to the right. 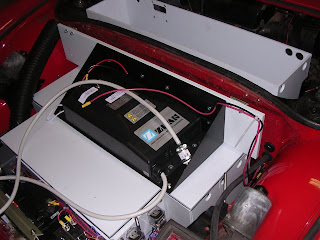 And here's the whole assembly in the vehicle. I still haven't bolted the hinges to the rear wall because I forgot to get enough 10-32 flathead bolts from the hardware store. The instructions call for 1-inch bolts, but I found that 3/4" worked just fine since the hinges are so thin. 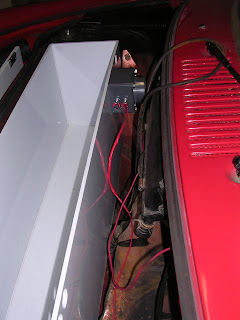 Moving onto the middle battery box: Here are the fan wires coming off the exhaust fan. The brown wire tied to the black fan terminal goes to a stud that is hidden and not easy to see under the heater hose to the right. 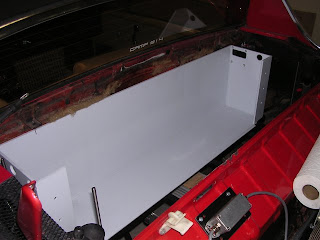 Here's the front half of the rear battery box going in. 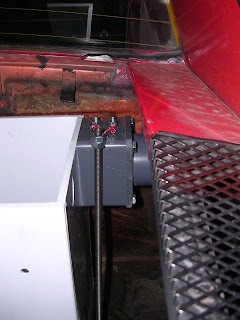 When installing the threaded hold-down rods, I found that there was so much gunk in the battery rack thread nut that I had to apply a rather large amount of torque just to make the rod go in the support nut. To get enough torque, I put two nuts on the top end of the rod and tightened them together so that I could put a wrench on the top nut and screw the rod in. 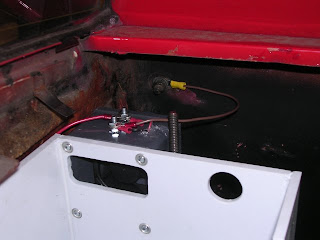 Here is the wiring for the rear box fan. I later changed the brown wire to point off to the left so there would be no interference with the tie-down bar. The instructions call for a red wire coming from the engine loom. I didn't find this and added my own red wire for the fan that goes back to the upper terminal block to the brown fan-power supply wire. Possibly a glitch in the instructions. 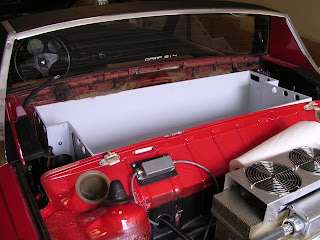 Here's the other half of the rear battery box installed. I was amazed at how tight a fit it is. The box didn't fit quite right (see far right corner poking up above the red wall), so I had to grind down some edges like I did a few days ago for the front battery box. Again, the fit is really tight. There's not more than one millimeter of space between the box edges and the front and rear walls. I feel rather fortunate to get this installed rather well. Hopefully the weight of the batteries will help it settle. 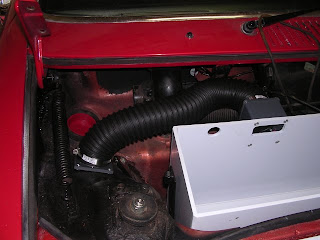 Here is the exhaust hose for the middle battery box. I think there's a problem with the instructions. They call for using 1/2" long bolts to hold down the exhaust port on the left, but due to the curvature of the wheel-well, this really requires more like 1-inch bolts for the nut to have enough threads to grab. 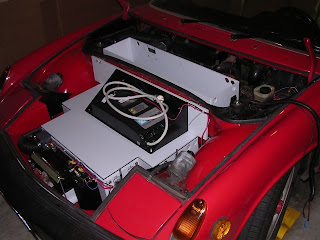 After running to the hardware store, I finally installed the hinges from the charger board on to the rear luggage compartment wall. Here is the whole setup installed. 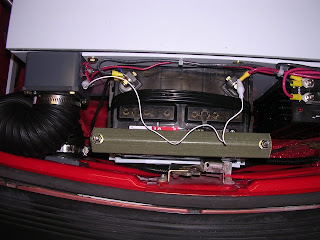 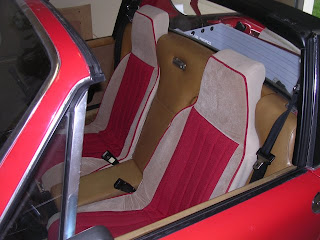 Since I've finished all the work on the firewall, I installed the seats again to free up more room in the tiny garage. 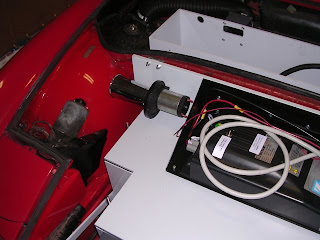 Here's my favorite WooGah horn mounted to the left of the charger. I don't know if the connections to the battery are better, but it's really loud! Get your WooGah on! 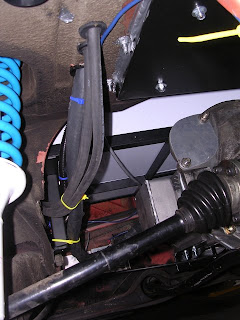 With the majority of the wiring done, I added several tie wraps to the cables under the rear luggage compartment to keep things from moving around. 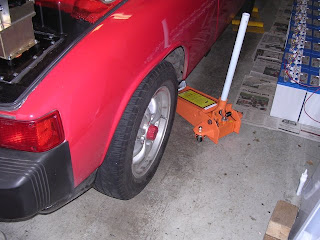 I also re-installed the rear tires since most of the undercarriage wiring is done. 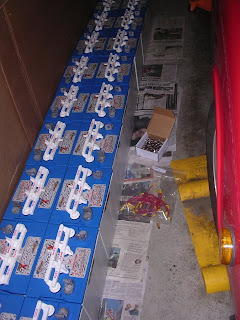 Last but not least, I took off all the temporary charging cables from the batteries so they are free to be installed in the vehicle.

I still don't have any instrument gauges from ElecroAutomotive, but I can put together temporary switches to get things going.

Next up: installing the batteries in the boxes!
Posted by TimK at 8:31 PM

Good grief! No wonder you're tired. But it looks like you're almost there...

Is the sound insulation pad going to be reused? It doesn't look like it in your pictures. I've repainted the engine compartment on mine and didn't do anything with that side. Oops

Your construction story is amazing. You must be putting as much time on the blog, as the car. I admire your work. It also looks like you have a very nice, clean car to start with. My is a bit "frazzled," but improving.
/roger
www.96-volt.com

Onei57, I tore out the sound insulation pad just because I couldn't install the rear battery rack or boxes with it in. The motor ought to be dead quiet, but I suppose there might be a desire for some temperature insulation.

Roger, thanks for the compliment. You've been making excelling progress on your VW. I have to keep telling myself that this is process to enjoy and not something to rush to finish (although having a convertible for the remaining part of summer would be great!)

what is the toggle switch on the zivan for?
thanks.

The toggle on the Zivan controls the maximum current pulled from the wall outlet. The low setting is 12 amps so I can plug into a 15 amp outlet at friends' houses. The high setting is 20 amps for a dedicated circuit at home for faster charging.