My friend Rick came over last night to help me feed the thick cable bundle through the driver-side heater duct. I didn't get any action shots, but here's the result. 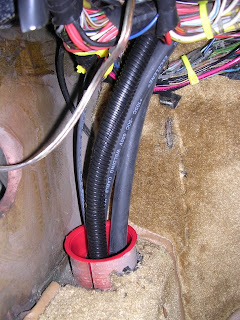 Here is the left side of the passenger compartment under the fuse box with the cables routed down into the heater duct. I've already added the 3-hole cap-plug provided in the kit. 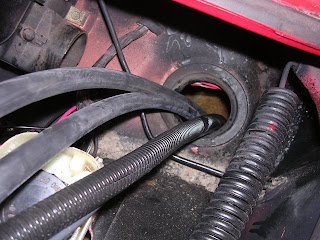 Here are the same cables coming out into the fuel compartment through the large grommet behind the fuse box from the passenger compartment. 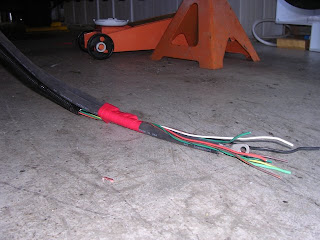 Here's the end of the cable lying on the floor that we pushed through the heater duct towards the engine compartment. The fishing wire and tape to keep everything together at the leading end has been removed. 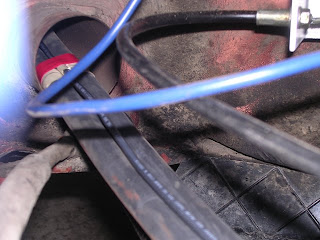 And again, the same cable coming out of the heater duct. Note the dual wrap of masking tape and red electrical tape called for in the instructions. This tells us when to stop pulling the cables through. 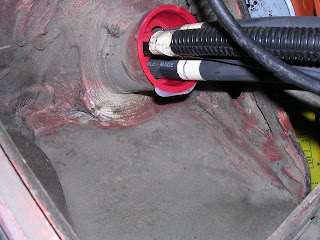 After cutting all the tape that bound the engine compartment cables together, I slid on the three-hole cap-plug from the kit and bonded it in place with silicone sealant. 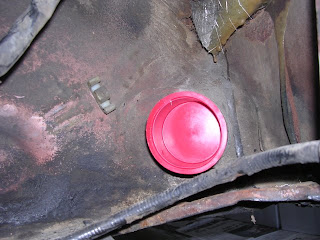 In addition to sealing the driver-side heater duct, there's also a cap-plug provided to seal the passenger side heater duct in the engine compartment. I suspect this will keep water and other outside elements from getting into the vehicle.

Today was a bit slow. The next task is to connect the wire ends of these two cables to the front and rear parts of the car. I did replace the 10-32 bolts that I used to hold down the PowerPost terminals so that the head wasn't so large that it cracked the post housing.

The DC version of this kit only has four instrument wires routed in the heater duct, two for the voltmeter and two for the ammeter. The AC kit has four more that allow the driver to control regenerative braking and rate of acceleration (like a valet switch).