Hanging out with NEDRA

Summer events have held me back from working on the 914EV, so I headed out to Portland International Raceway to get a boost of inspiration from NEDRA (National Electric Drag Racing Association) to continue the project. Here are some photos. 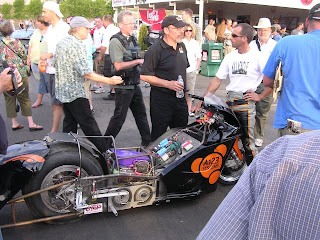 Here's the famous KillaCycle powered by just under 1000 A123 batteries, the same kind that go into the DeWalt cordless drills. The KillaCycle ended up posting a run on Friday of 152mph in the quarter mile. They will try again tonight to go faster. The purple box in the center of the cycle is a Zilla2K (2000 amp DC controller). 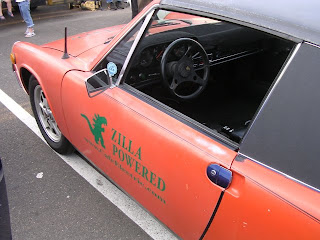 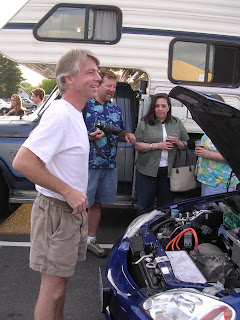 Here is Otmar Ebenhoech, designer of the popular Zilla DC controllers. He is standing in front of an all-electric Honda Insight which contains his prototype Tri-Zilla AC controller. You can see a bit more about Otmar on YouTube at: http://www.youtube.com/watch?v=Yl9uejKnMFQ 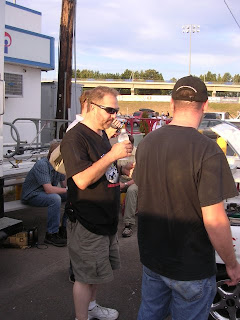 Here is John Wayland, creator of the fastest EV street-legal car in the world, the White Zombie. 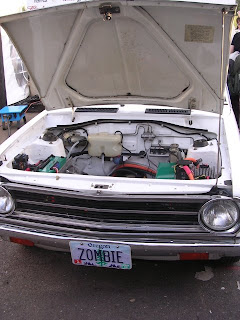 And, of course, the White Zombie. 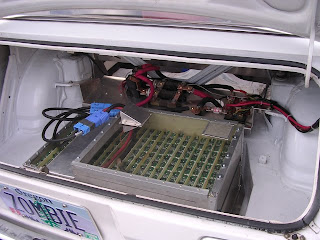 This time, White Zombie is running with A123 Lithium-Ion Batteries instead of lead-acid. The battery pack is tiny compared to the lead-acid version, saves about 700 pounds in weight and puts out so much power, that John needs to limit the current to prevent the car from skipping right off the road. 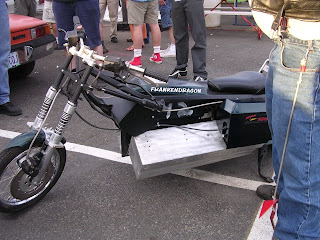 An older drag-racing cycle called FrankenDragon based on lead-acid technology. 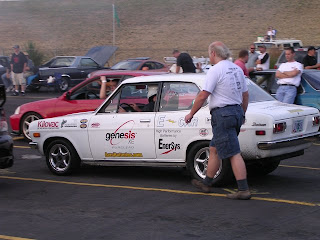 Here is the White Zombie waiting in line for it's first warmup. 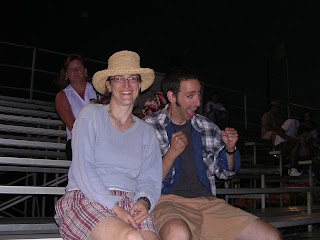 Thanks to my friends Ruth and Joe for coming out and hanging with me during the event.

I was amazed at how accessible these vehicles were to the general public. I was able to walk inside the "pit" area and talk with the designers directly and see all the vehicles, up close. The next NEDRA event at PIR is August 17-18. I hope to have my car ready for that event, not necessarily to race it, but just to share the technology.
Posted by TimK at 9:49 AM